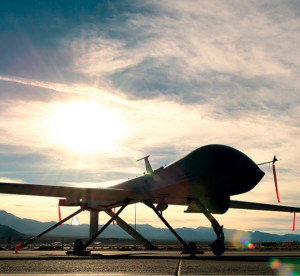 An MQ-1 Predator sits on the flight line Dec. 8, 2016, at Creech Air Force Base, Nev. The Predator started as an RQ-1 in the late 1990s, providing only reconnaissance capabilities until the early 2000s, when it was equipped with two AGM-114 Hellfire missiles and designated as a multi-role asset.

The MQ-1 Predator is a Remotely Piloted Aircraft flown by aircrew assigned to the 432nd Wing/432nd Air Expeditionary Wing at Creech Air Force Base, Nev., and units around the world.

It has contributed to U.S. war fighting efforts in unprecedented ways and is scheduled to sunset on March 9, 2018, as the Air Force transitions to an all-MQ-9 Reaper force.

With the introduction of aerial warfare, countries all over the world raced to the skies to gain tactical advantage over their adversaries. Devices such as balloons were used in early conflict for reconnaissance and, while the thought of such technology seems primitive today, that same pursuit of aerial superiority ultimately inspired the MQ-1.

The 11th RS took operational control of the deployed RQ-1 at Taszar, Hungary, in the fall of 1996. Joined in Indian Springs by the 15th RS in the summer of 1997, deployed members of these units flew the Predator’s first combat missions over the Balkans in 1999 to provide ISR for U.S. and coalition strike aircraft under Operation Allied Force.

Over the years, the RQ-1 had its fair share of growing pains until Airmen were able to tap into its full potential.

During early RQ-1 deployments, several aircraft were destroyed due to infrastructure problems or surface-to-air missiles. Through trial and error, aircrews employed innovative thinking which led to the transformation of the RPA mission and it highlighted what crews brought to the fight.

Additional examples of innovation included when Airmen switched to a turbo engine, making the aircraft more dependable flying at high altitudes and adding sophisticated pods, to include hyperspectral technology.

Airmen flew unarmed Predators from Sept. 18, 2001 until Oct. 7 of the same year, after which aircrew flew the Predator’s first armed mission as part of Operation Enduring Freedom. The aircraft continued to undergo modifications after it became strike-capable.

“The mighty MQ-1 may not be fast, but our proficient aircrews and support personnel capitalized on its new capabilities to deliver unmatched persistence, exceptional reconnaissance, and precision attack to combatant commanders worldwide,” said Col. Julian C. Cheater, 432nd WG/432nd AEW commander. “I believe the employment of MQ-1s helped shape a new type of warfare, where dangerous enemies of the U.S. and its coalition partners have no sanctuary.”

In 2003, a new tactic was developed. The RPA enterprise called it “remote-split operations,” and it changed how RPAs were flown. In this new capability, RSO used satellites to send signals to the aircraft once airborne, allowing crews to fly missions from anywhere in the world.

The Predator showcased its new capabilities during Operation Iraqi Freedom in 2003. 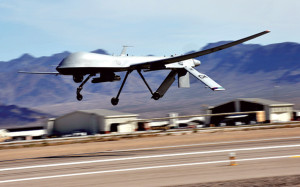 An MQ-1 Predator flies above the flight line during launch and recovery training at Creech Air Force Base, Nev. Aircrew will fly the MQ-1 for the final time at Creech on March 9, 2018, before it is officially retired from the Air Force inventory.

Air Combat Command fielded yet another modification within the RPA community in 2004 called the Remotely Operated Video Enhanced Receiver, or ROVER for short. ROVER allowed ground forces to see real-time video feeds from Predators overhead via a portable tablet. This resulted in greater situational awareness which ultimately saved lives.

As Airmen proved the MQ-1’s strike proficiency and senior leaders recognized its lethality, the demand for RPAs grew. In 2006, the Air Force responded by introducing the MQ-9 Reaper RPA as the Predator’s successor. The MQ-9 could fly faster, climb higher and was optimized for combat with more weapons capacity.

One year later, ACC activated the 432nd Wing at Creech to oversee RPA operations and training worldwide. As RPA involvement in conflicts grew, the community expanded, standing up more active-duty units along with its first Air National Guard and Air Force Reserve units.

In 2011, the MQ-1 and MQ-9 enterprise achieved a monumental milestone. Aircrew flew 1 million combat hours. That year also marked the start of the MQ-1’s involvement in Operation Odyssey Dawn during the Libyan civil war and the end of Operation New Dawn in Iraq.

“Between the Predators and Reapers alone, we have 303 aircraft, and we are now approaching 2.5 million [flight] hours, of which 90 percent has been in combat,” said James Clark in a 2014 interview. Clark was then ISR innovation director, and now serves as deputy chief of staff for ISR, Headquarters U.S. Air Force.

In 2014, the enterprise began executing operations against the Islamic State of Iraq and Syria as part of Operation Inherent Resolve. During this coalition effort, MQ-1s, alongside MQ-9s, played a key role in liberating cities from the oppression of terrorism. In late 2017, Combined Joint Task Force OIR declared ISIS defeated.

In 1945, in a post-World War II address, Gen. Henry H. “Hap” Arnold, U.S. Army Air Forces commander said, “We have just won a war with a lot of heroes flying around in planes. The next war may be fought by airplanes with no men in them at all … It will be different from anything the world has ever seen.”

Arnold never had the chance to see the MQ-1 Predator or the MQ-9 Reaper in action, but as the commander of the 432nd Wing said, “Our success employing the Predator reflects the amazing teamwork with our industry partners, coalition friends, joint forces and our Airmen to realize Gen Arnold’s prediction. Together we have found innovative ways to employ a remotely piloted, propeller-driven aircraft in the modern era to protect Americans and our way of life.”

Editor’s note: This article is part one of a four-part series.