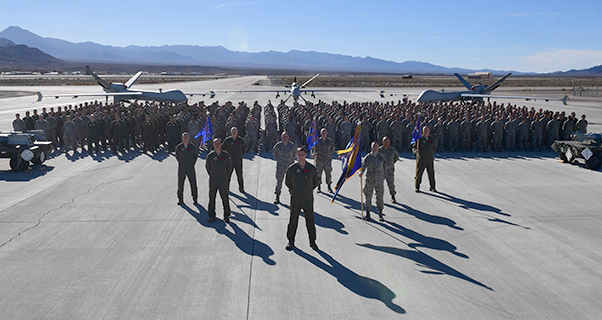 Wing leadership and Airmen of the 432nd Wing/432nd Air Expeditionary Wing stand in formation for their historical wing photo, Feb. 5, 2018, at Creech Air Force Base, Nev. The unit celebrated its 75th anniversary and the many achievements the wing accomplished throughout its history, Feb. 22, 2018 at Creech.

Members of the 432nd Wing celebrated its 75th anniversary and the many achievements the wing accomplished throughout its history, Feb. 22, 2018 at Creech Air Force Base, Nev.

The unit was activated as the 432nd Observation Group Feb. 22, 1943, at Alachua Army Air Field, Fla., as the nation prepared for World War II.

The group performed various missions over the years, such as training cadres for new groups and squadrons, tactical aerial reconnaissance in support of combat operations, and now expanding remotely piloted precision attack, intelligence, surveillance and reconnaissance.

“I think in order to look towards the future, you have to start in the past,” said Chief Master Sgt. Jamie Augér, 432nd WG/432nd Air Expeditionary Wing command chief.

During the Vietnam era, the wing undertook a newly intensified combat role as the mission set grew to incorporate combat air patrols against Mikoyan-Gurevich aircraft and ground strikes, leading to 36 confirmed MiG kills as well as the only Air Force “Aces” of the era.

The wing was redesignated as the 432nd Tactical Fighter Wing in 1974 and in the following year proved instrumental in locating and recovering the S.S. Mayaguez, an American freighter that was captured by Cambodia.

At the close of the Vietnam War, the 432nd TFW supported the evacuation of American and allied personnel from Cambodia and South Vietnam and was later inactivated Dec. 23, 1975.

The unit acquired the responsibility of evaluating and testing unmanned aircraft after its redesignation as the 432nd Tactical Drone Group in 1976.

The wing served as a tactical fighter wing once more at Misawa Air Base, Japan. While there, the unit supported a tactical employment mission flying F-16 Viper aircraft, received a third flying squadron and inactivated when the 35th Fighter Wing stood up.

The unit was returned to active status May 1, 2007 as the 432nd WG at Creech, forming the U.S. Air Force’s first Remotely Piloted Aircraft wing.

“The past was built on the men and women who maintained, built this aircraft and innovated it to what it is today,” Augér said. “That transition from older aircraft which focused on intelligence, surveillance and reconnaissance and now is focused not only on (ISR), but (also) our strike mission platforms.”

With its continued presence in combat operations, the 432nd WG was later joined by the 432nd AEW in 2008. This provided the most adequate leadership for the execution of remotely piloted persistent attack, surveillance and reconnaissance in the fights at hand.

To keep up with operational demand, the Hunters have experienced organizational changes including the addition of the 732nd Operations Group, as well as, an increase in combat lines from 21 to 60 lines since 2007.

“One of the best things — and I think Gen. Goldfein hit it best — is we are just scratching the surface of this aircraft and what it’s capabilities are,” said Augér. “That innovation comes from each of those Airmen who work on this aircraft. Our maintainers, our communications specialists everyday are working on how we can make this aircraft better not only for our Airmen but for the coalition forces around the world.”

In the past year, the unit has supported the liberation of 99 percent of ISIS-held territory, helped return 2.7 million Iraqis and 715,000 Syrians to safety, and flown approximately 216,000 flight hours, employing 2,900 weapons.

Today, the wing maintains the second greatest number of flying squadrons within the Air Combat Command and delivers 24/7/365 strike and surveillance capabilities to America’s enemies.