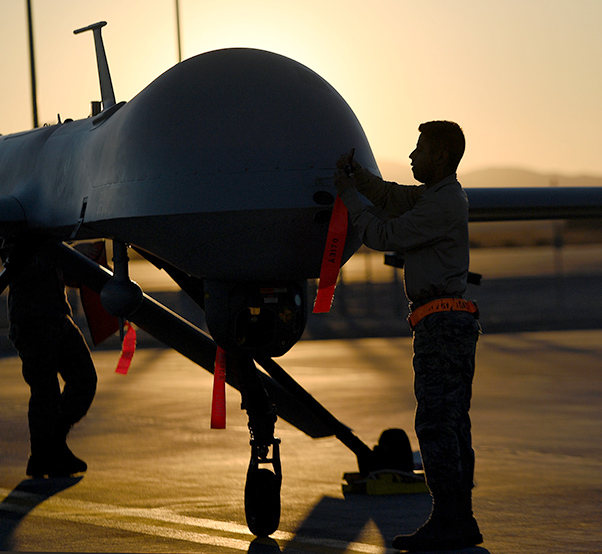 An Airman assigned to the 432nd Maintenance Squadron performs post-flight checks on an MQ-1 Predator Feb. 2, 2018, at Creech Air Force Base, Nev. The MQ-1 served as a premier Remotely Piloted Aircraft for combatant commanders and coalition partners for more than 20 years and is scheduled to officially retire March 9, 2018, at Creech AFB.

With the retirement of the MQ-1 Predator on the horizon, MQ-9 Reapers were successfully transferred via flight from one combat operation to another within the U.S. Central Command area of responsibility for the first time.

In January, Airmen facilitated the flight of MQ-9s from Operation Inherent Resolve to Operation Freedom’s Sentinel.

As aircrews seamlessly continue to provide dominant, persistent attack and reconnaissance capabilities to meet war front demands from the MQ-9, MQ-1s enter the transition phase out of active inventory.

When the Air Force determines to retire an aircraft, it goes through a screening process outlined in the Defense Materiel Disposition Manual. In the case of the MQ-1, officials are still executing that process and are working with other agencies to determine configurations and quantity for a possible transfer.

There are a number of possibilities where retired MQ-1s could go, including U.S. and coalition museums. 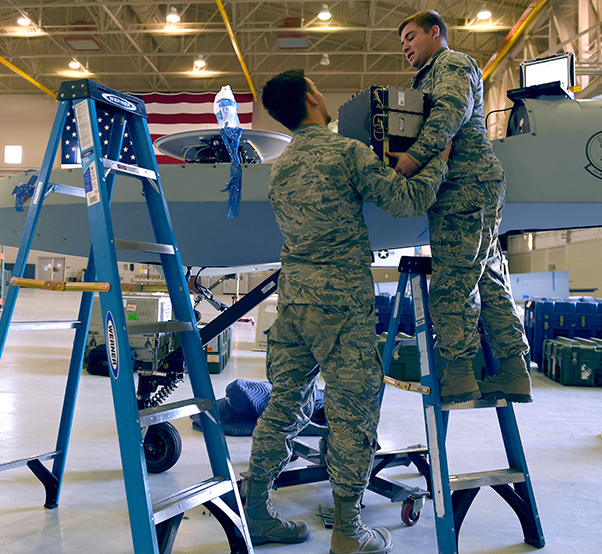 Airman 1st Class Chase and Senior Airman Nathan, both avionics specialists assigned to the 432nd Aircraft Maintenance Squadron, remove the Primary Control Module from an MQ-1 Predator, which is its central point of processing for all aircraft functions Nov. 30, 2017, at Creech Air Force Base, Nev. Airmen with the 432nd Maintenance Group demilitarized a few MQ-1s in their inventory before they were dispersed to England where they’ll be displayed in museums.

Currently, Creech Airmen have transported one MQ-1 to the American Air Museum in Duxford, England, and another to the Royal Air Force Museum in London where visitors will learn about the aircrafts’ achievements and contributions.

“Back in 2015, we coordinated with Air Combat Command and came up with a game plan to demilitarize the aircraft,” said Staff Sgt. Jonathan, MQ-1 and MQ-9 crew chief with the 432nd Aircraft Maintenance Squadron. “We started making progress and now have the final MQ-1 flight scheduled to take place in March.”

Predators were demilitarized before the scheduled shipment date while Airmen continued supporting the local training missions at Creech and provided maintenance support to downrange operations.

“It [preserving history] gives me a chance to explain how I used to work on this aircraft to my family when I see it in a museum one day,” said Jonathan. “It’s a bittersweet feeling, having worked on this aircraft the majority of my career.” 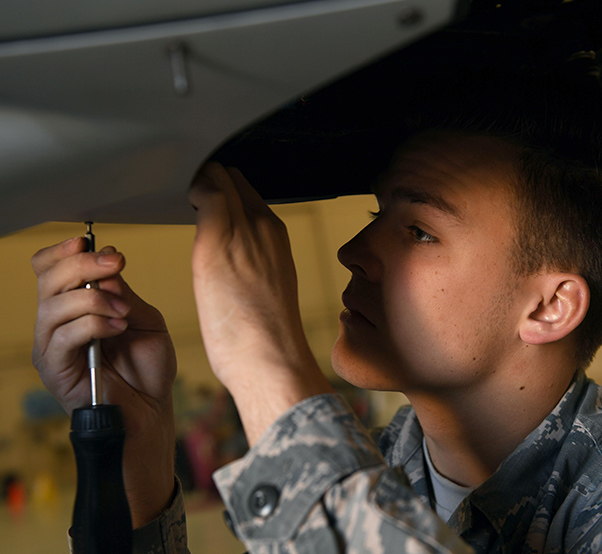 The MQ-1 began as just an innovative thought, but proved to be an effective and desired asset thanks to the efforts of Airmen who supported its mission set.

The two MQ-1s from Creech are marked with the tail numbers 03-3119 and 03-3120, and have an estimated 14 years of service in the Air Force. During that time, aircrews recorded approximately 22,800 flight hours and 1,500 sorties in support of combat operations and local training missions.

The aircrew who flew them made key contributions to U.S. and coalition efforts while active.

“It is sad that the MQ-1 Predator is sun setting, but we are excited for the new era of flying the MQ-9 Reaper,” said Capt. Fred, MQ-1 pilot. “I am so proud of the missions we’ve accomplished and the lives we’ve saved.”

Editor’s note: This article is part two of a four-part series. 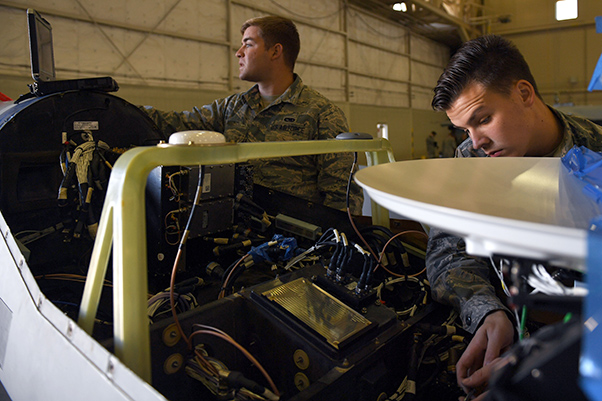 Senior Airman Nathan and Airman 1st Class Chase, avionics specialists assigned to the 432nd Aircraft Maintenance Squadron remove an antenna during the MQ-1 Predator demilitarization process Nov. 30, 2017, at Creech Air Force Base, Nev. This MQ-1 was one of two Predators that were demilitarized and sent to England to serve as a museum display and symbolizes the ties the U.S. Air Force has with our coalition partners. 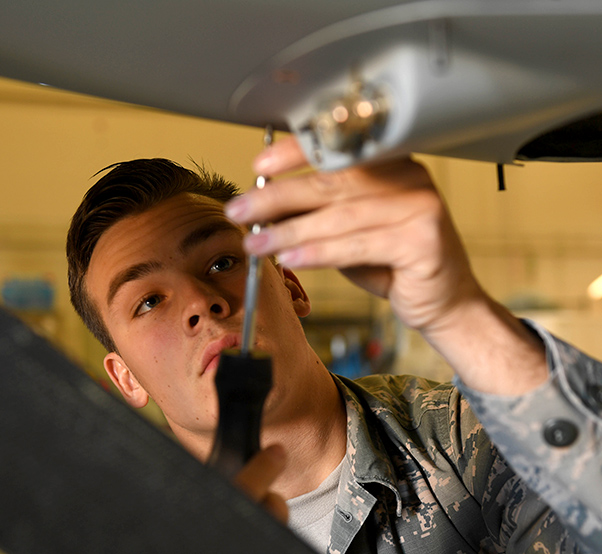 Airman 1st Class Chase, 432nd Aircraft Maintenance Squadron avionics specialist works on an MQ-1 Predator during its demilitarization Nov. 30, 2017, at Creech Air Force Base, Nev. As a standard practice, Airmen retain all salvageable parts during the process in an effort to save U.S. tax dollars and ensure the aircraft is safe for public display. 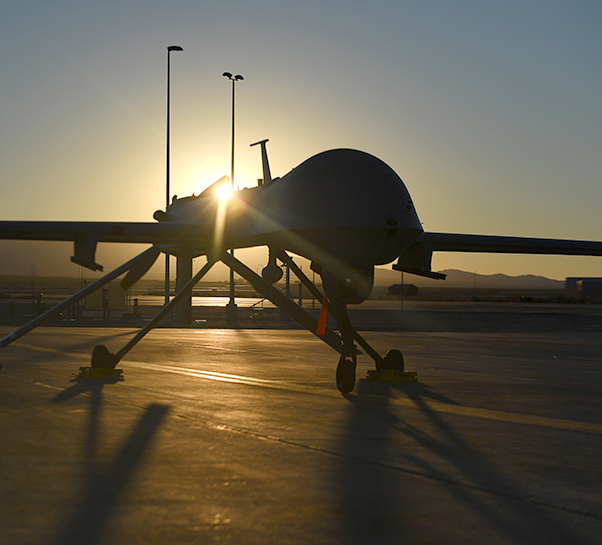 An MQ-1 Predator sits on the flight line after an aircrew flew one of the last MQ-1 local training sorties Feb. 2, 2018, at Creech Air Force Base, Nev. The MQ-1 was active for more than 20 years and evolved from a pure intelligence, surveillance and reconnaissance platform to later include persistent attack capabilities during that time.