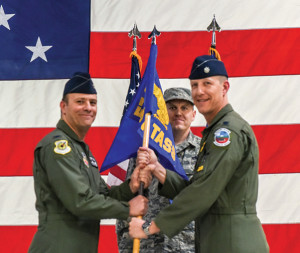 “Starting up a new squadron is a unique situation because we can set up our own culture,” said Lt. Col. Tyler Niebuhr, 24th TASS commander. “A lot of times when you go to a unit, it already has a defined culture that makes it its own. We now have the ability to mold what those traditions are going to be like and figure out how that’s going to work.”

There was a conference a couple years ago about the CAS mission – part of the outcome was to generate the CAS Integration Group, said Niebuhr.

“The intent was to encapsulate a range of CAS missions and culture with the activation of a fighter squadron, the 24th TASS, and focus only on things like training joint terminal attack controllers and flying support missions for multiple U.S. Air Force Weapons School weapons squadrons,” said Niebuhr.

The 24th TASS is in a unique position to use the F-16 to specialize in CAS.

As an F-16 pilot, you’re often told to be a ‘jack of all trades’ because we do almost every Air Force flying mission, said Capt. Wayne Mowery, 24th TASS fighter jet pilot.

“Here at the 24th TASS, they want us to be experts in CAS. It’s really fascinating because most F-16 pilots don’t get that opportunity to get really good at one thing. Usually every two weeks we’re shifting focus and training on something new,” said Mowery.

Unlike air-to-air combat, CAS is all about getting up close and personal with the target.

“Close air support is unique because you’re working in close proximity to friendly forces on the ground, and there has to be defined coordination with them so we can achieve the set objective,” said Niebuhr.

Maintenance is also critical to the mission of any flying unit. The maintenance team that supports the 24th TASS is made up of contractors who are mostly prior Air Force, said Niebuhr. They bring a lot of knowledge to our unit and have a phenomenal perspective on getting things done.

“I’ve had very few difficulties with maintenance since being here,” said Mowery. “The crew chiefs are very experienced and know everything that’s going on, so it’s been a very seamless integration.”

Even though they are a relatively small squadron, the 24th TASS is focused on making an impact, not just within their own squadron’s history, but within the CAS mission as a whole.

“I think it will be really fascinating not just seeing what becomes of the squadron 10 or 15 years from now, but seeing what they’re doing at that time that maybe we never thought to do,” said Mowery. “If we instill that culture of ‘doing what makes the most sense now, because it’s the best decision,’ that’s the culture we want. Not just to create traditions that exist for no reason, but for them to happen organically because they’ll last.”