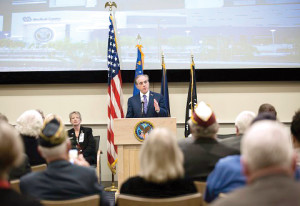 Secretary of Veterans Affairs Dr. David J. Shulkin speaks at the North Las Vegas VA Medical Center March 9, 2018, during an announcement of the City of Las Vegas’ selection for the Mayor’s Challenge to Prevent Suicide Among Service Members, Veterans and their Families.

The City of Las Vegas and Southern Nevada have been selected by the Department of Veterans Affairs and the Substance Abuse and Mental Health Services Administration as one of eight municipalities nationwide for the Mayor’s Challenge to Prevent Suicide Among Service Members, Veterans and their Families.

“The single most important issue clinically to us in VA right now is to reduce veteran suicide,” said Secretary Shulkin. “Twenty veterans a day that take their life through suicide is a number that is so staggering, it’s really hard to even begin to think about, but certainly, none of us should accept that. There’s just so much more that we can do.”

Joining the secretary for the announcement was Nevada Governor Brian Sandoval, who spoke about reducing suicide in a state with a growing veteran population.
“There is recently released data from the VA that shows that Nevada’s veteran suicide rate is one of the highest in the nation,” the governor stated. “That’s unacceptable, and that’s why we need to do more … You have my commitment, and you have the commitment of the people of the State of Nevada that we’re going to do everything we can to work with you to really turn this around and make Nevada the most improved state in the country with regard to suicide prevention.”

A VA state-by-state study of suicide data from 2014 found that, after accounting for differences in age, the veteran suicide rate in Nevada is significantly higher than the overall national average with 22.6 percent, or more than one out of every five suicides in the state, being committed by a veteran. Additionally, the study also revealed that of the estimated 20 veterans who take their lives daily, 14 were not connected to VA care or services.

As one of the first eight cities selected for the Mayor’s Challenge, the City of Las Vegas will form an interagency team comprised of experts from city, county, state, federal and nonprofit agencies to increase awareness of VA and other resources available to service members, veterans and family member in crisis.

“I’m very proud of Las Vegas being selected as one of the eight cities where we’re going to study and work on the [veterans] suicide problem,” said Congresswoman Dina Titus, a former House Veterans Affairs Committee member who represents the City of Las Vegas. “You’ve heard the statistics and know people who are in these desperate situations and it’s great that the VA is making mental health a priority along with physical health … I urge you as you move forward to address this problem here in Nevada to think outside the box. There are some programs going on around this country to address PTSD and depression.”

Shulkin stressed the importance of suicide prevention efforts at the local level, with a focus on a coordinated approach to address mental health care.

“One thing we know that makes the most difference is the work within the communities … within that fabric of not for profits, churches and local governments … to use a public health approach to reduce veterans suicide,” he said. “That’s why Las Vegas has been selected.”

As the lead for Southern Nevada’s public approach to reduce veterans suicide, the City of Las Vegas sent a core team to Washington, D.C., March 14-16 to attend the Mayor’s Challenge Policy Academy.

During these meetings, team members from the eight cities had the opportunity to participate in technical assistance sessions, learn about innovative suicide prevention strategies, share best practices and develop action plans to for their communities.

“We will be taking our expertise [to Washington, D.C.] and look forward to working with experts from across the country,” said City of Las Vegas Councilman Steve Seroka who will represent Las Vegas Mayor Carolyn Goodman at the policy academy. “We will bring back what we learn and share it to execute and take this important mission to the next level.”

“This week we’ll be delivering to the president a plan to allow every active service member who is transitioning from service to have a mental health care coverage benefit,” the secretary stated. “Today, just 40 percent of those who leave the service are eligible for VA mental health care. That needs to be 100 percent because the single highest incidence of suicide for veterans is that first 12 months after leaving the service.”

The proposal follows one of Shulkin’s first initiatives as VA Secretary to provide mental health services to veterans with other than honorable administrative discharges. “Fifteen percent of our service members get a discharge like that many times related to a behavioral health issue or post-traumatic stress … people who need the benefits the most who are unable to get them,” he said.

Under the initiative, former OTH service members with an emergent mental health need can present at a VA emergency department, Vet Center or contact the Veterans Crisis Line for emergency stabilization care. They can receive care for their mental health emergency for an initial period of up to 90 days, which can include inpatient, residential or outpatient care. During this time, the Veterans Health Administration and the Veterans Benefits Administration will work together to determine if the mental health condition is a result of a service-related injury, making the service member eligible for ongoing coverage for that condition.

“This is such an important day for us to be together, to make sure that we are all giving our support to all of those who are going to be leading us through this effort, because we can make a big difference, and we can do it right here in Nevada,” the secretary said to an at-capacity crowd of elected officials, veterans service organization leaders and service providers. “When I look at how each of you came because this is an important issue and because you support veterans, it gives me tremendous hope that this community is going to make a difference and that we’re going to be successful in finding solutions that we can share with the rest of the country.”

Veterans in crisis or having thoughts of suicide–and those who know a veteran in crisis–should call the Veterans Crisis Line for confidential support 24-hours a day, seven-days a week, 365-days a year. Call 800-273-8255 and press 1, chat online at VeteransCrisisLine.net/Chat, or text to 838255.