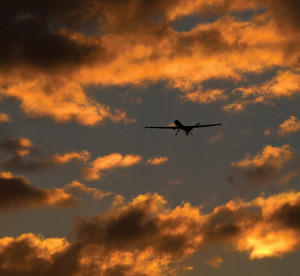 An MQ-9 Reaper flies a training mission, Feb. 14, 2018, at Creech Air Force Base, Nev. Airmen were able to seamlessly transition between platforms, which prevented a loss of MQ-9 capabilities for combatant commanders.

As the official retirement of the MQ-1 Predator has passed, many people are reflecting on the new and innovative capabilities it provided on the battlefield over its tenure.

Its shift from an intelligence, surveillance and reconnaissance aircraft to a multi-role platform, further shaped the outlook of senior leaders and combatant commanders alike.

The MQ-1 revolutionized the Air Force’s use of Remotely Piloted Aircraft in dynamic situations, inevitably paving the way for an all MQ-9 Reaper force.

As the MQ-1 fades into aviation history, the demand for combat RPAs hasn’t wavered. The MQ-9 is the more capable successor to the MQ-1 and will replace all Predator combat lines in active areas of responsibility.

“The MQ-9 is much more capable because it allows for an increase payload,” said Maj. Matthew, 22nd Attack Squadron MQ-9 pilot. “When you look at the basics, the MQ-9 is twice as fast with a longer on-station loiter time, which is exactly what the ground commanders need.”

The MQ-1 retirement ceremony was held March 9 at Creech AFB, while the transition from MQ-1 to MQ-9 will be complete by the end of calendar year 2018. Airmen have prepared for the change.

RPA pilots and sensor operators have already begun the Transition Track 4 Course to learn the platform differences between the MQ-1 and MQ-9. Aircrew must complete the training together in order to become qualified in the new major weapon system.

Aircrew members will no longer be qualified in the previous MWS, but rather qualify on the MQ-9, and become mission ready in two months.

After the course, graduates will enter unit-level mission qualification training for the purpose of achieving basic mission capable or combat mission ready status. Graduates will be trained to perform the primary missions of ISR, air interdiction, and close air support.

Matthew recalls the first thing he noticed after switching to the MQ-9 was a shift to a faster paced tactical mindset.

“Although MQ-1s have the capability to strike, the MQ-9 was specifically designed for attack situations and is in demand from the ground commander due to its increased capability,” said Matthew.

In addition to attack capabilities, newly qualified aircrews will also become familiar with secondary roles and missions such as strike coordination and reconnaissance, dynamic targeting and combat search and rescue.

Amidst the transition, previous MQ-1 maintenance personnel were required to become MQ-9 qualified through an integrated training process which began in February 2017.

“Here at Creech, specifically this shop, we are dual-qualified Airmen. That means we work on the MQ-1 and the MQ-9,” said Staff Sgt. Jonathan, 432nd Maintenance Squadron. “We are going to take everything positive that we learned from the MQ-1 and carry that over to the MQ-9. We will apply everything that we now know.”

Both processes ensure that all previous MQ-1 Airmen are able to seamlessly transition between platforms, which prevents a loss of MQ-9 capabilities for combatant commanders.

“Here at Creech, our Airmen faced the challenge head on while remaining dedicated to preserving combat capabilities,” said Col. Julian Cheater, 432nd Wing/432nd Air Expeditionary Wing commander. “Their resiliency and innovative spirit continues to be the driving force behind the Air Force’s ability to find, fix and finish our adversaries anytime, anyplace, anywhere.”

Editor’s note: This article is part three of a four-part series.

Out front: Growing beyond your comfort zone