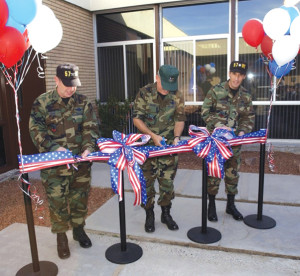 Leadership from Nellis Air Force Base cut a ribbon at the opening ceremony of the Advanced Maintenance and Muntions Operations School in 2003. AMMOS focus is on the logistics of sortie production on home stations and deployed locations rather than the sorties.

The U.S. Air Force Advanced Maintenance and Munitions Operations School (AMMOS) celebrated its 15th anniversary recently with the graduation of Class 18-A.

This was also the first class to combine officers and senior noncommissioned officers into one course.

“The idea is that there will be no such thing as an enlisted or officer AMMOS graduate, just AMMOS graduates,” said Senior Master Sgt. Nicholas Lovegreen, AMMOS superintendent.

AMMOS is a school house that was established in 2003 to mirror the U.S. Air Force Weapons School but focus on the logistics of sortie production on home stations and deployed locations rather than the sorties themselves, said Lt. Col. Joseph DePorter, AMMOS commandant.

“The creation of the school house was driven by deficiencies in deploying expeditionary skillsets and focused on creating aircraft maintenance and munitions officers well-versed in agile combat support,” said DePorter.

Since its inception, AMMOS has graduated close to 700 officers and senior NCOs — each experiencing something new to take home to their work centers.

“One of the biggest challenges for me was that I worked primarily on tankers and cargo aircraft throughout my career, but the course focused a lot on fighters, bombers and the munitions that goes along with it,” said Chief Master Sgt. Jerry Peterson, Quality Assurance superintendent at Ramstein Air Base, Germany. “It really opened my eyes about the fighter community on how munitions are brought in, built, delivered, installed and inspected.”

For some students, it was the networking and relationships that they built here with their peers that was the most beneficial thing outside the curriculum.

“The comradery and community you build with the other people going through the same course is important because now you have these relationships that will last your entire career and beyond with who you can reach out to,” said Capt. Holly Gramkow, AMMOS graduate from Ramstein AB.

For others, it was a new perspective they had gained that they valued most.

“I look at a problem differently now. I look at the challenges we face differently so when I go home, the way that I analyze things that are happening and implement some of these changes that they have taught in the class,” said Capt. Kelli Walker, AMMOS graduate from Mountain Home Air Force Base, Idaho.

Overall, everybody learned something new that they could take back to their shops to teach their own Airmen and help the people and processes be more efficient.

“We charge our students to be producers, mentors and advisors,” said Lovegreen. “For the most part when they walk in the door, they’re all producers. They know how to get the job done, but through mentoring and advising they can take the knowledge they learn here and take it back to their shop and share it with everybody.”

More than a decade ago, AMMOS was just an idea on a sheet of paper. Today, it is the Air Force’s go-to spot for learning the ways of advanced sortie production.

“As the first AMMOS commandant, I was fortunate enough to be able to hand-pick the initial cadre,” said retired Col. Steven Morani, Air Force Sustainment Center director of logistics.

“Starting the school house was incredibly hard work, from physically building it to creating the curriculum in the amount of time we had,” said Morani. “There were people who didn’t think we would be able to get the school going as quickly as we did, but because of the talent and cooperation from that first team we were able to do it.”

He said he still sees that same talent and cooperation in today’s cadre and students who continue to uphold the AMMOS legacy of building excellent producers, mentors and advisers.