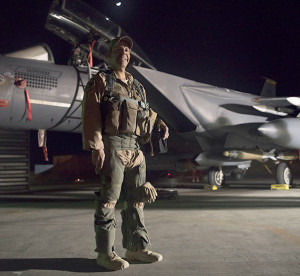 Lt. Col. Trinidad “Moses” Meza, 336th EFS deputy operations group commander and weapons system officer, poses for a photo after landing in an F-15E Strike Eagle March 21, 2018, at an undisclosed location in Southwest Asia. The F-15E Strike Eagle is a dual-role fighter designed to perform air-to-air and air-to-ground missions. Meza, in the capacity of WSO, is able to display information from the radar, electronic warfare or infrared sensors; monitor aircraft or weapons status and possible threats; select targets; and use an electronic “moving map” to navigate.

Members of 336th Expeditionary Fighter Squadron along with 332nd Air Expeditionary Wing leadership surprised a weapons system officer, or WSO, when he landed March 21, 2018, at an undisclosed location in Southwest Asia.

During the flight, Lt. Col. Trinidad “Moses” Meza, 336th EFS deputy operations group commander and WSO, reached 4,000 flying hours, all of which were accrued in the F-15E Strike Eagle.

“It’s a pretty special feeling,” he said, “It’s an honor to be able to live out a childhood dream for 18 years.”

High timer flyers may finish their careers between 1,500 or 3,000 total flying hours, Swanson said, adding “4,000 is off the charts” and to be able to achieve such a thing, “he’s had to work hard and be good at what he does” which he has always done.

Meza is currently on his ninth deployment, which he volunteered for. During this time, he has completed more than 50 sorties and about 270 combat hours. In his career total, he has completed more than 1,300 combat flying hours and about 1,920 sorties. His other deployments include Incirlik Air Base, Turkey; Al Udeid Air Base, Qatar; Al Dhafra Air Base, United Arab Emirates; Bagram Airfield, Afghanistan; and Ethiopia.

At all of these assignments, he supported the F-15E as the WSO, which is one of only two crewmembers the aircraft carries, the other being the pilot.

During the air-to-surface weapon delivery, the pilot is capable of detecting, targeting and engaging air-to-air targets while the WSO designates the ground target. Meza, in the capacity of WSO, is able to display information from the radar, electronic warfare or infrared sensors; monitor aircraft or weapons status and possible threats; select targets; and use an electronic “moving map” to navigate.

“He is responsible for guiding in the bombs, for talking with the joint teams on the ground and understanding the ground scheme maneuver — he’s busy,” Swanson said.

Meza is also busy at his home station, Nellis Air Force Base, Nev., as an operation test WSO.

“We are charged with testing all the new software for the F-15E, any new weapon systems so that when they get released to the combat Air Forces they are ready to go,” he explained. “It’s very rewarding and a lot of fun.”

For example, he was part of the first aircrew that shot an operational AIM-9X off of an F-15E. He also flew in the first aircraft with the new radar that is currently being used.

“That is real exciting and because of that he knows how the jets are built, software and that sort of thing very well,” Swanson explained. “So, he has really been an asset when things aren’t working right or how to best deploy the aircraft with the systems we have. He has been a real value to the team”

There is no doubt that Meza is passionate about his job whether it is stateside or deployed.

“Flying an airplane is something I wanted to do since I was six years old,” he said, adding that he was inspired by the Air Force Museum at Wright-Patterson AFB, Ohio. “This is my childhood dream come true. I have been able to fly with some pretty amazing people and flying is incredible. ”

This passion he shares along with his accumulative knowledge as he makes a point to take time to mentor.

“The reason I continue to do what I do is to … mentor (younger aviators) and provide advice based on past experiences,” said Meza, native of Gallup, New Mexico. “One of the things I enjoy most is watching young kids show up with no experience and full of energy – but no idea what to do with that energy – and molding them into professionals, leaders and well-seasoned, well-trained aviators.”

Meza has seen lots of unusually circumstances and has a large amount of experience, which he uses to help newer aviators to adjust to this location’s more austere environment and adapt their expectations. His experience is also helps shape the way the unit conducts combat operations, Meza said.

“He’s a tactical Yoda,” Swanson said. “He’s the guy you go to when you have questions.”

“We are blessed to have him on our team,” Swanson added. “He’s not part of our unit; we are from Seymour Johnson AFB, (North Carolina), and he’s from Nellis AFB. We are really fortunate that he’s out here.”