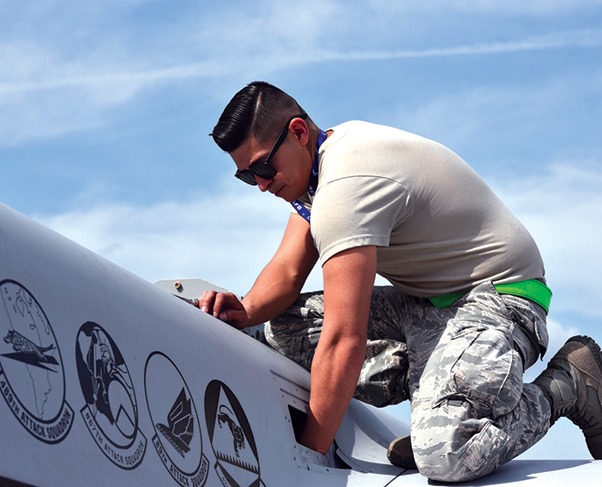 The MQ-9 Reaper display made its debut for the 2018 season at the Wings Over Columbus Air and Space Expo April 21, at Columbus Air Force Base, Miss.

Aircrew, intelligence and maintenance Airmen from the 432nd Wing/432nd Air Expeditionary Wing briefed attendees in the MQ-9 display area and communicated the capabilities of the aircraft, explained the 432nd’s mission and addressed any misinformation regarding the Remotely Piloted Aircraft enterprise.

“I think it’s very important to attend events like these. It’s a great opportunity to engage the public and inform them about what we do in the RPA community,” said 1st Lt. Jake, MQ-9 pilot with the 22nd Attack Squadron. “This face to face interactions help people understand what we do.”

The MQ-9 model is the only one of its kind in the Air Force inventory, and offered airshow visitors a life-size visual of the Reaper. With Airmen on standby, visitors were able to ask general questions about what goes into supporting MQ-9 operations, and who all is involved at any given time.

For most visitors, it was obvious that this was their first time seeing the Reaper, and they were able to learn about the actual mission set versus inaccurate assumptions, Jake said.

Aircrew seized the opportunity to speak about the Wing’s 24/7/365 operations tempo, and emphasized why the MQ-9 is such a key platform in the fight downrange. 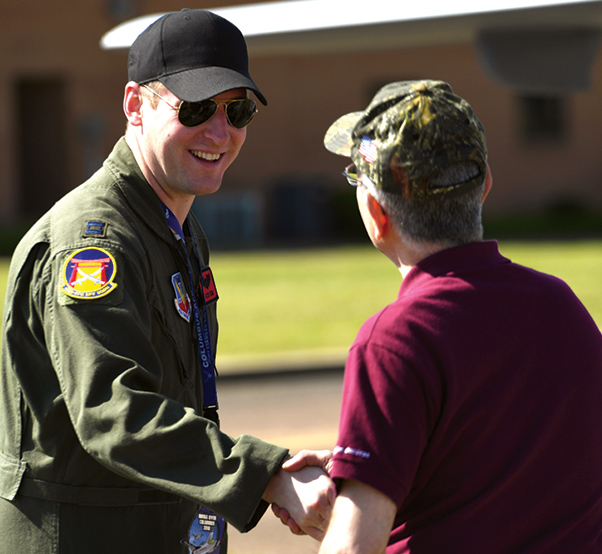 An MQ-9 Reaper pilot assigned to the 432nd Wing/432nd Wing shakes the hand of a visitor during the 2018 Wings Over Columbus Air and Space Expo April 21, 2018 at Columbus Air Force Base, Miss. MQ-9 aircrew communicated the 432nd WG/432nd AEW mission and explained how Airmen exploit the MQ-9s persistent attack capabilities to deliver justice to those who wish harm.

Jake said the expertise of 432nd WG/AEW Airmen operating and supporting the MQ-9 mission is demanded every single day, and it is important for the American public to know that.

Throughout the airshow, thousands of visitors stopped by the display to gaze at the hollowed Reaper and hundreds spoke with MQ-9 personnel to clarify any RPA misconceptions.

Static displays are traditionally included in airshows and demonstrations as a way for the public to interact with the men and women who operate the aircraft in the military’s arsenal.

The Wings Over Columbus Air and Space Expo was no different as it featured more than 20 statics such as the F-15 Eagle, F-16 Fighting Falcon, C-5 Galaxy, and A-10 Thunderbolt II to offer an in-depth look at each aircraft.

Unlike the other aircraft that are flown in for the show, the MQ-9 has to be transported via airlift or ground transport to its destination. Once in place, it is unpacked, built, and towed into place by 432nd WG/432nd AEW maintenance Airmen. 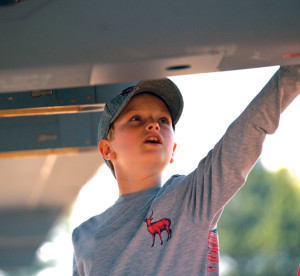 A child touches the fuselage of the MQ-9 Reaper model during the 2018 Wings over Columbus Air and Space Expo April 21, 2018, at Columbus Air Force Base, Miss. The model is the only one of its kind in the Air Force inventory and is used to show visitors a life-size representation of the Reaper.

The assembly process takes around three to six hours and requires at least eight to ten personnel and the appropriate equipment to complete.

“Making sure the MQ-9 was built and ready in time for the show was truly a team effort,” said Staff Sgt. John, 432nd Maintenance Squadron weapons load crew team chief. “It took collaborating with all of our expertise in the maintenance field and executing to the best of our abilities.”

This marked the first time the MQ-9 model made an appearance in Mississippi and was its first stop in the 2018 campaign to further knowledge of MQ-9 operations and the men and women of the 432nd WG who deliver justice around the clock.