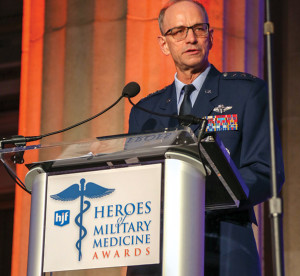 Photograph courtesy of the Henry M. Jackson Foundation for the Advancement of Military Medicine

Nelson, who was nominated by Lt. Gen. Mark Ediger, U.S. Air Force Surgeon General, is board certified in orthopedic surgery and aerospace medicine. Nelson’s 27-year career has taken him around the globe, acquiring more than 1,100 flying hours and numerous achievements and honors along the way.

“Flight surgeons are responsible for the health, safety, and performance of those service members who operate aircraft or conduct missions from aircraft,” said Ediger. “Nelson was a special operations flight surgeon, which meant that the mission took him to some rough places, great distances from suitable medical care. With years of experience, including participation in combat operations, Nelson became recognized by Airmen and medics alike.”

The three Airmen from the 99th Medical Group at Nellis Air Force Base in Las Vegas were enjoying a night off attending the Route 91 Harvest Festival in Las Vegas when a deadly mass shooting began. They selflessly came to the aid of other concertgoers. Employing their medical skills and mass casualty training, they administered life-saving care, at times in the line of fire.

“They had no inkling that an outing with friends to attend the concert would become the tragedy that unfolded,” said Ediger. “Within an instant they found themselves surrounded by chaos, under deadly attack and surrounded by many in need of life-saving assistance. These three Airmen put themselves in a considerable amount of risk to render life-saving care to the wounded. They maintained remarkable composure while in the direct line of fire.”

Nelson’s dedication and expertise have not gone unnoticed throughout his Air Force career. As a special operations squadron flight surgeon, he served in Special Operations Command Pacific. He also commanded the 39th Medical Operations Squadron at Incirlik Air Base, Turkey, and the 435th Aerospace Squadron at Ramstein Air Base, Germany, the Air Force’s largest overseas aeromedical squadron. 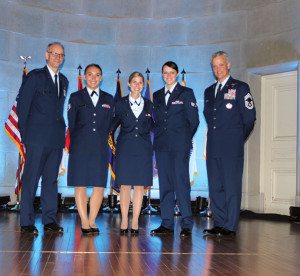 During the deadliest mass casualty shooting in modern American history, the courageous actions of Venegas, Wilson, and Bennett helped save many lives. They sheltered them to safety while in the line of fire, administered life-saving care until victims were able to be transported, and triaged critical patients as they arrived at nearby hospitals.

“It wasn’t fight or flight,” said Wilson. “It was fight.”

One of those saved was an off-duty police officer who sustained an abdominal wound. Venegas kept him stable until emergency workers could transport him to a nearby hospital. Wilson administered trauma care to numerous victims and loaded patients into passing vehicles to get them to hospitals. In the line of fire, Bennett quickly stepped into action, ensuring the safety of others by directing nearby concert staff to build a shelter for other concertgoers to protect them from gunfire. She also improvised tourniquets for victims to prevent further blood loss.

These four Airmen truly exemplify the mission of the Air Force Medical Service, going above and beyond their duties to care for others, grow AFMS capabilities, and serve in defense of our nation.