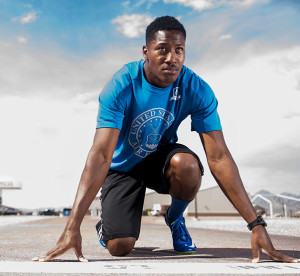 Airman 1st Class John kneels on a track before a sprint while training for the 2018 Department of Defense Warrior Games at Creech Air Force Base, Nevada, May 22, 2018. John’s accomplishments in the Air Force Wounded Warrior Trials in February earned him a spot on the Air Force’s Wounded Warrior track and field team, with whom he will compete in the 100-, 200- and 400-meter events.

Disbelief was the first emotion that overtook a radio frequency transmission systems Airman as he fell from a mobile antenna and instinctively shot out his arms to brace his 15-foot fall. The impact from the fall dislocated both wrists and pushed the small bones of his hands into his forearms.

Airman 1st Class John, an Airman 432nd Aircraft Communications Maintenance Squadron at Creech Air Force Base, Nev., had surgery to reset his bones and worked with the Air Force Wounded Warrior Program to establish a road toward recovery.

Like all wounded warriors, John began his path to the Warrior Games by participating in Warrior CARE events throughout the country, then competing and qualifying at the Air Force Trials — working with expert coaches, sports trainers and nutritionists to not only prepare for competition, but enhance his recovery.

“The Wounded Warrior program has allowed me to recover in such a way that I didn’t think was possible,” said John. “It has helped physically and mentally because I honestly didn’t even want to get back into working out. I was too afraid; I didn’t want to take the chance of reinjuring myself further.”

Since his recovery, John competed against more than 150 athletes in the Air Force Wounded Warrior Trials Feb. 23 to March 2, earning three gold medals for track and field events. The Air Force Trials are part of an adaptive and resiliency sports program designed to promote the mental and physical well-being of the wounded, ill and injured service members who participate.

“I couldn’t do anything for myself,” said John. “I was completely immobilized. My wife and kids took care of whatever I needed. They saw me in so much pain, but now they see that I’m still myself, and can still do the things I like do even though I have injuries.”

John’s accomplishments in the trials has earned him a spot on the Air Force’s Wounded Warrior track and field team, with whom he will compete in the 100-, 200- and 400-meter events.  The Department of Defense Warrior Games will host approximately 300 wounded warriors June 1-9 at the U.S. Air Force Academy in Colorado Springs, Colorado. Athletes from the U.K. Armed Forces, Australian Defence Force and Canadian Armed Forces will also compete.

The schedule for the Warrior Games is available at https://dodwarriorgames.com/schedule/.