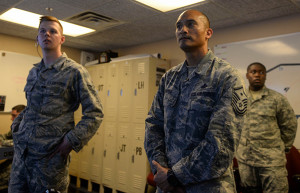 Master Sgt. Jonathan Baysa, 57th Operations Group first sergeant, observes Airmen training in the air traffic control tower on Nellis Air Force Base, Nev., May 9, 2018. As a first sergeant, Baysa is responsible for making sure his Airmen are mission ready.

Recognized by the diamond on their sleeves, first sergeants are vital members of every squadron across our Air Force because they keep the Airmen mission ready.

A first sergeant is a senior noncommissioned officer meant to provide a dedicated focal point for the welfare, health, morale, readiness, discipline and quality-of-life issues that the Airmen in his or her squadron are experiencing.

The greatest asset our Air Force has is its Airmen. The jets cannot fly, and the mission won’t get accomplished without the hard work and dedication they put in every day. Airmen are its most powerful weapons, and it’s important that there’s someone there to help them through their rough times, said Master Sgt. Christopher Jachimiec, 99th Communications Squadron Quality Assurance Flight chief and former first sergeant.

“We’re the ones that build people back up,” said Jachimiec. “Whether it’s the loss of a family member, divorce, financial hardship or serious medical issues, first sergeants are always there to help every Airman.”

Often referred to as a “first shirt,” the duty of a first sergeant is a liaison between the squadron commander and enlisted members.

From over-looking the welfare of hundreds of Airmen to traveling across base to boost morale, being a first shirt is a full-time job. 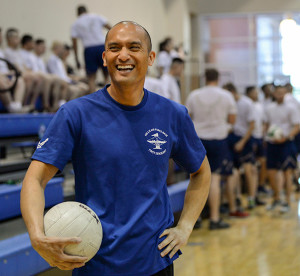 Master Sgt. Jonathan Baysa, 57th Operations Group first sergeant, takes part in a volleyball game with Airmen graduating from the Airmen Leadership School at the Warrior Fitness Center on Nellis Air Force Base, Nev., May 9, 2018. The volleyball game is one of many activities first shirts engage in to boost morale.

“First sergeants are there for Airmen more than the Airmen think,” said Master Sgt. Justin Koch, 99th Air Base Wing Staff Agencies and 99th Comptroller Squadron first sergeant. “We dedicate our time to strictly helping them so they can succeed and be mission ready.”

First shirts are beneficial to both the Airmen they’re helping and the Airmen’s supervisors. Supervisors are responsible for watching over their Airmen while trying to focus on getting their jobs done. A first sergeant’s main priority is the Airmen; they are trained to either help the Airmen or guide them to someone who can.

“My first shirt was extremely knowledgeable,” said Ergus. “He gave me information that I needed and allowed me to help my fellow Airmen in the same situation.”

Jachimiec explained focusing on resiliency and remembering his purpose helped him overcome the challenges of being a first sergeant. By taking a short moment to breathe and meditate after a long day, Jachimiec is able to focus on his family and create a balance in his life.

The needs of the Airmen don’t stop, which can lead to difficulty balancing work and personal life for first sergeants. 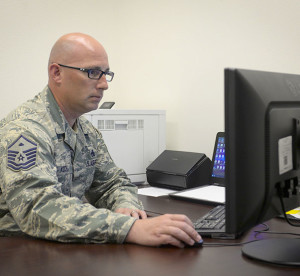 Master Sgt. Justin Koch, 99th Comptroller Squadron first sergeant, checks his email in his office at Nellis Air Force Base, Nev., May 9, 2018. First shirts can be contacted by calling their first sergeant phone, emailing them or taking a visit to their offices.

Despite the demanding hours and mounds of paperwork, first sergeants continue to work hard for the sake of their Airmen’s progression. Shirts will give up their weekends, holidays and sleep to make sure their Airmen are given the help they need. They sacrifice so much because they have a genuine desire to help others and make the Air Force enlisted force the best they can.

“I became a first sergeant to pay it forward,” said Jachimiec. “When I was a young Airman, a first sergeant helped me more than I could imagine, and I wanted to be able to do the same for others.”

First shirts can be contacted by calling their first sergeant phone, emailing them or taking a visit to their offices.

“Don’t be hesitant to contact your first sergeant,” said Koch. “We’re here to help Airmen in any way possible, so they can have prosperous careers.”