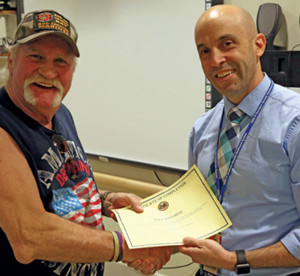 The Non-Combat PTSD Program began at VASNHS in March and is a 16-week course, which provides both group-oriented therapy sessions and individual therapy for veterans suffering the effects of post-traumatic stress disorder from a wide range of traumatic activities not related to combat.

“The program, as run here, is unique to this facility and the classes and manuals were developed locally,” said Steven Fisher, a VASNHS clinical social worker who manages the program.

Non-combat PTSD can come from a number of sources, according to Fisher. “Handling human remains following an accident or mishap, witnessing a plane crash or other duty-related accident, having a near-death experience outside of combat, experiencing racism/violence as a military member, or experiencing physical trauma during training are all common causes of military trauma,” Fisher said ”Non-military trauma can include events such as childhood sexual or physical abuse, childhood exposure to violence in a high-crime neighborhood, and severe automobile accidents.”

Regardless of the source, combat and non-combatPTSD have many similar effects on the daily life of a veteran, but that doesn’t mean that their treatment should be handled the same. Fisher stated that it’s important to treat the different groups of PTSD separately. “In order to treat the full scale of veterans dealing with trauma, it is important to provide programs that address all forms — combat and non-combat,” he said. “Those who have experienced combat trauma will commonly relate better to one another, while non-combat vets will feel more secure getting treatment with those who share similar experiences outside of combat.”

While the group portion of the program is critical, veterans also have the opportunity for personal counseling via individual therapy sessions. Therapeutic processing of the traumatic events occurs in individual therapy when warranted, using evidence-based treatment. Veteran participants do not share their trauma stories in the group. That setting is reserved strictly for skills development. Fisher says that this formula has yielded positive results. “I’ve seen a greater ability to talk openly about the traumatic events, to handle previously upsetting situations with increased calm, to manage the stress response through daily relaxation practices, and to manage negative thinking through increased awareness and understanding,” he said.

Ray Willhite, a Marine Corps veteran who is graduating along with the first class of Phase 1, said that the group portion of the program is helping him to deal with anger issues that have come up in the past. He said he used to get in fights following his traumatic event, but working in the group setting has helped him find peace and understanding with other people, and provided him with the best medicine: laughter. “I’m finishing the first phase, but I’ll be here for the Second Phase, and whatever else is required.” Willhite added, “as long as it’s helping me with my family, I going to do what it takes.”

Sondra Peterson is another veteran moving on to the next phase of the Non-Combat PTSD Program. As the first female participant, she used the class to overcome anxiety. “Coming into this, it was intimidating because it was a male counselor and male classmates, but within the first week, I was able to build trust with these guys. Who I was 16 weeks ago compared to who I am now are completely different things. I would love to see more female Veterans come to this program.”

As the first group of six veterans prepares to graduate from the program, the course is already seeing growth with as many as 13 veterans participating in the second group. The next skills group began June 21, but subsequent sessions will be held on a first-come-first-serve basis. Veterans who qualify for Non-Combat PTSD counseling should receive a referral from their provider.”