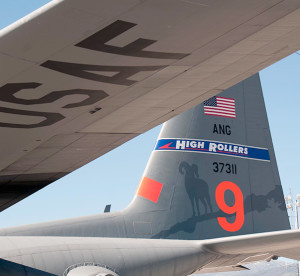 A C-130 from the Nevada Air National Guard’s 152nd Airlift Wing sits on the flight line before leaving Reno, Nev., for Peterson Air Force Base in Colorado to assist federal agencies in firefighting efforts, July 5, 2018.

The 152nd Airlift Wing, known as the “High Rollers,” is one of four military C-130 units around the nation equipped with MAFFS for large-scale wild land firefighting.

The initial request lasts through July 12.

About a half dozen large wildfires have ravaged areas around the Centennial State this summer and burned more than 100 homes. The 152nd Airlift Wing, along with other MAFFS crews, could potentially be called for any of these fires.

Ready to answer call
“The High Rollers always stand ready to answer the call for federal firefighting missions,” said Air Force Lt. Col. Steve Mills, 192nd Airlift Squadron commander and pilot with the 152nd Airlift Wing. “We’ve read in the news about the devastation from the fires in Colorado, and we’re prepared to do anything we’re asked to do to help fight the fires.”

MAFFS equipment, loaded into the cargo compartment of a C-130 aircraft, can drop up to 3,000 gallons of water or fire retardant in six seconds through a nozzle on the rear left side of the plane. The Forest Service owns MAFFS equipment and supplies retardant. The four military units provide C-130 aircraft, maintenance, support personnel and flight crews to fly the missions.

Given the military’s non-compete clause with private industry, private air tankers receive first request for large-scale, wild land firefighting. Military units have provided the surge capacity with MAFFS since 1974, but are activated only after private contractor assets are exhausted and the Forest Service deems additional support is necessary.

The 152nd Airlift Wing was named the newest MAFFS unit in 2016, replacing the North Carolina Air National Guard’s 145th Airlift Wing. Since 2016, 152nd Airlift Wing aircrews have worked and trained with other MAFFS units to gain certification for wild land firefighting. This summer could mark the first autonomous firefighting missions for the unit without assistance from other units since it entered the MAFFS community two years ago.