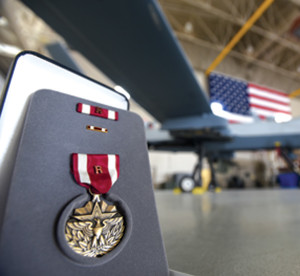 Air Force photograph by Senior Airman James Thompson
A U.S. Air Force medal with an attached remote “R” device sits in front of an MQ-9 Reaper July 9, 2018, at Creech Air Force Base, Nev. The “R” device distinguishes an award earned for hands-on employment of a weapon system that had direct and immediate impact on a military operation, without being exposed to hostile action or immediate danger.

A U.S. Air Force medal with an attached remote “R” device sits in front of an MQ-9 Reaper July 9, 2018, at Creech Air Force Base, Nev. The “R” device distinguishes an award earned for hands-on employment of a weapon system that had direct and immediate impact on a military operation, without being exposed to hostile action or immediate danger.

The device was authorized in 2016, with criteria released in 2017, establishing an award earned for hands-on employment of a weapons system that had direct and immediate impact on a combat operation or other military operations. Qualifying actions can be performed in any domain, including cyber, but must not expose the individual to personal hostile action.

This award ceremony recognized the direct impact Remotely Piloted Aircraft aircrews have on the battlefield and distinguished those who performed extraordinarily in their capacities.

The “R” device is authorized for placement on the Legion of Merit, MSM, AFCM and Air Force Achievement Medal. It is not authorized on any other ribbon or medal.

Their selection was based on stringent criteria, including strategic significance, protection of ground forces, leadership displayed, critical thinking, level of difficulty and innovation.
“It is a great honor to recognize the contributions of these Airmen,” said Cheater. “Much of the world will never know details of their contributions due to operational security, but rest assured that they have made significant impacts while saving friendly lives.”

All devices may be awarded retroactively to Jan. 7, 2016.

Bringing fight to the enemy
In three separate combat operations, aircrews from the 432nd Operations Group (OG) and the 732nd OG were successful in eliminating threats and saving the lives of American and coalition forces on the ground. 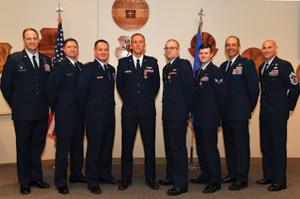 The crew supported dominant persistent attack and reconnaissance over 74 days to identify a high-value target and known terrorist. Once identified, the crew adapted to a dynamic situation as the target traveled through densely populated areas at a high speed.

Evan’s crew provided key input and strategic coordination with other aircraft and buddy-lased for the strike, successfully removing the theater’s number two high-value individual from the battlefield. Buddy lasing is a technique where a laser-equipped aircraft guides in a laser-guided weapon delivered from another aircraft.

Evan said the “R” device should help shed light on the impact RPA aircrews have in battle. He was humbled to be recognized and hopes that those outside of the enterprise gain a better understanding of what RPAs bring to the fight.

“I went home that night and I knew what I did,” said Evan. “I think to the outside community, something like this will give a sense of perspective.”

While scanning for Islamic State of Iraq and Syria enemies ahead of coalition forces on the ground, the crew discovered a truck with a large caliber machine gun mounted in the bed moving toward friendly forces. The vehicle began firing at the friendly forces for a short period of time and then returned to a garage. The enemy repeated this maneuver multiple times.

The crew began coordinating a nine-line with a Joint Terminal Attack Controller for strike authorization. While maneuvering the aircraft, the crew noticed a large group of civilian adults and children across the street in an alley from the vehicle firing at friendly forces.

With a persistent attack capability, the crew elected to wait until the vehicle returned back to the garage in order to protect civilians. 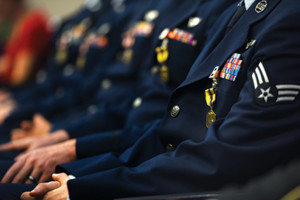 “In this particular situation, we were able to quickly assess that the enemy was not yet inflicting effective fire on friendly forces which allowed us to completely prepare for the strike,” said Eric.

Once the truck returned to the garage, Eric and Jason took action. Using their only AGM-114 Hellfire missile, they eliminated both the vehicle and enemy combatants who performed hostile actions, while safeguarding friendly forces and civilians.

Additionally, Capt. Abrham, 432nd OG MQ-9 pilot and his aircrew were scanning a known hostile area when the weather deteriorated, causing all manned aircraft to exit the area. Abrham remained on station. After several hours of surveillance, he observed enemy personnel begin to open fire on friendly forces.

All recipients made key decisions in the heat of the fight which saved lives on the battlefield.

Recognizing modern warfare contributions
This device originated from the controversial Distinguished Warfare Medal proposed in 2014. Similar to the “R” device, the original decoration aimed to honor those who made a significant impact in combat without physically being exposed to hostile action.

The proposition was declined due to its ranking, which would have placed it above the Purple Heart and Bronze Star with the Combat valor “V” device, a suggestion that didn’t sit well with many combat veterans.

Simultaneously, Air Force officials announced that it would be replaced by a device that would attach to authorized medals. Since then, Air Force leadership has made strides in normalizing the RPA enterprise with the Culture and Process Improvement Program, an initiative that brought forward several improvements including improved manning, additional basing opportunities and streamlined training. 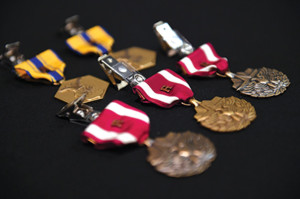 “These members create direct combat effects that lead to strategic outcomes and deliver lethal force, while physically located outside the combat area,” said Lt. Gen. Gina Grosso, the deputy chief of staff for manpower, personnel and services in a 2017 release.

As the community grows, recognizing RPA Airmen achievements with the “R” device is another step toward normalizing remote operations relative to other weapon systems.

“It’s important to recognize the unique character of this type of warfare, and the RPA Airmen who provide significant contributions to the joint fight,” said Lt. Gen. Mark Kelly, 12th Air Force commander.

RPAs allow for a 24/7/365 mission, but the Airmen in the cockpit are the driving force behind that mission set. They continue to meet the demand of combatant commanders and coalition forces around the world.

“The unwavering and collective dedication of the members of the RPA community often means that U.S. family members are able to reunite with their deployed loved ones again and innocent civilians are liberated from ruthless groups like ISIS,” said Cheater. “The ‘R’ device denotes that there were critical impacts accomplished from afar–often where others cannot go–and that we are ready to fight from any location that our U.S. leaders determine is best.”

Seeing red: a remedy with a melody