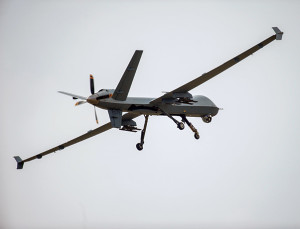 An MQ-9 Reaper performs a low pass during a first-ever air show demonstration May 29, 2016, at Cannon Air Force Base, N.M. The 2016 Cannon Air Show highlights the unique capabilities and qualities of Cannon’s Air Commandos and also celebrates the long-standing relationship between the 27th Special Operations Wing and the High Plains community.

As Red Flag 18-3 comes to a close, those halls will slowly de-congest as units from around the world start returning to their home stations and leave behind a memento to add the collection.

For one MQ-9 Reaper squadron, the 3rd Special Operations Squadron from Cannon Air Force Base, N.M., it will be their first opportunity to leave the squadron’s legacy on the 414th CTS as Red Flag first-timers.

“It’s not just the 3rd SOS’ first-time at Red Flag, but it’s the first time for Air Force Special Operations Command (AFSOC) MQ-9 Reapers as a whole,” said Capt. Jordan, 3rd SOS MQ-9 weapons officer. “Other MQ-9 communities, like Air Combat Command (ACC), have participated in Red Flag before so I was able to observe them during the last few Red Flags to wrap my head around how to get our squadron here.”

Unlike the other weapon systems that participate in Red Flag, the MQ-9 is in a class of its own. During the exercise, MQ-9 crews integrated with joint and coalition fighters and bomber aircraft to demonstrate the Reaper’s multi-role capabilities.

“The big thing the MQ-9 is going to bring to the fight is the reach back,” said Jordan. “We’ve got all the different communication lines connected to where we’re at which allows us to not only see every aspect of the battlefield, but also make real-time decisions to help influence it as well.”

Units from all around the world travel to Nellis Air Force Base to participate in Red Flag exercises every year. For two to three weeks, it is fast-paced, large-force training that integrates all aspects of air, space and cyberspace.

Jordan said there’s a lot of mission planning that goes into an exercise like this versus day-to-day operations, but the training they learn here at Red Flag gives them a chance to do detailed mission planning and then go and execute it with on-scene command.