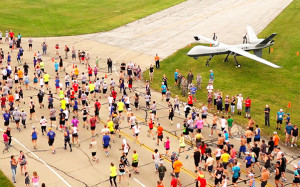 The MQ-9 Reaper sits next to the runway as runners pass by during the 2018 Air Force Marathon Sept. 15, 2018, at Wright-Patterson Air Force Base, Ohio. MQ-9 aircrew, maintainers and intelligence Airmen traveled with the aircraft sharing its persistent attack and reconnaissance capabilities and the role they play in today’s military operations.

The MQ-9 Reaper was this year’s featured aircraft for the 22nd annual Air Force Marathon Sept. 13-15, 2018 at Wright-Patterson Air Force Base, Ohio.

MQ-9 aircrew, maintainers and intelligence Airmen traveled to the marathon with the aircraft in order to share its persistent attack and reconnaissance capabilities and the role they play in today’s military operations.

Tens of thousands of runners, spectators and vendors attended the event and had the opportunity to interact view the aircraft and speak with MQ-9 Airmen.

“Most of the time we’re back in our classified environment and nobody really sees who we are, so coming out here and being able to talk to people, interact with them and help them understand what the MQ-9 is and it’s capabilities is really awesome,” said Capt. Adam, 22nd Attack Squadron MQ-9 pilot.

Each year, one aircraft is chosen to be highlighted during the marathon and on the unique finisher’s medal presented to each race participant. This was the second time a Remotely Piloted Aircraft has been featured in the marathon. The RQ-4 Global Hawk held the spot in 2009.

This year’s marathon participants and spectators got an up-close look at the Reaper and learned how the men and women of the 432nd Wing/432nd Air Expeditionary Wing utilize its capabilities in modern warfare to save lives.

“Our goal is to promote what we’re doing,” said Adam. “Until a few years ago, not much has been talked about what RPAs really do and bring to the fight.”

MQ-9 aircrew and support personnel carry out a 24/7/365 mission, in which they have direct impact in military operations across the globe. Aircrew are capable of providing a multitude of key combat capabilities such as close air support, multi-ship coordination, buddy lase and persistent reconnaissance for U.S. and coalition forces on the ground.

“The MQ-9 Reaper was chosen because it is such an amazing force multiplier for our U.S. Air Force,” said Col. Thomas P. Sherman, 88th Air Base Wing commander. “This representation of the Reaper gives us the opportunity to showcase not only the lethality of what we can do remotely, but also the level of ISR (Intelligence, Surveillance, and Reconnaissance) that we can garner from this platform, and we are truly appreciative for all the men and women at Creech Air Force Base and the 432nd WG/AEW to help make this possible.”