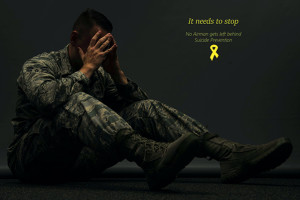 Suicide is one of the leading causes of death among military members and yearly claims more lives than combat. Making small changes, such as the way Airmen approach each other, can have a profound effect on someone’s life and could even lead to fewer suicides among service members.

“I remember sitting in my room typing up a letter to everyone, apologizing for being such a failure and causing so many problems. I finished typing the note and had my pills lined up on the table.”

Suicide is one of the leading causes of death among military members and yearly claims more lives than combat.

“Before I did anything I had to say goodbye to one last person who I truly loved, my best friend,” Airman 1st Class Justin Foose, Shaw Air Force Base, S.C., continued to say. “I texted her telling her I loved her and she quickly caught on to why I was saying that. Within seconds she came up to my room and was banging on my door.”

There is no specific reason linked to why military members take their own lives, but certain biopsychosocial, environmental and sociocultural factors can cause increased risk.

“Being aware of the signs of suicide is very important because it does not have a specific look to it,” said Airman 1st Class Courtney Creel, Medical Operations Squadron mental health technician. “If you think someone may be thinking about suicide in the slightest you should approach them directly and suggest sending them our way. It is our mission to help our fellow Airmen and get them back to work and their best selves.

According to experts, biopsychosocial, environmental and sociocultural factors contribute to increased suicide risk.

Biopsychosocial factors are caused mainly by mental illness such as depression, schizophrenia and bipolar disorder and contribute to most suicide attempts.

Environmental factors are usually caused by stressful life events such as the loss of a loved one or being a victim of harassment, bullying or physical abuse.

Sociocultural factors can be caused by the feeling of isolation, not belonging and having difficulty seeking help or support.

Foose said he contemplated suicide multiple times, putting himself in different situations that could have ended his life, such as jumping in front of oncoming traffic. He was fortunate enough to have friends and strangers recognize he needed a helping hand and reach out so he could continue to be here today.

Foose, along with other Airmen, believe that when Airmen come to each other asking, “How are you doing? Are you okay?” It should be done in a sincere way as if the uniform were off — not in a way that makes it seem like someone is just checking a box and then told to get back to work.

Making small changes, such as the way Airmen approach each other, can have a profound effect on someone’s life and could even lead to fewer suicides among service members.

For more resources regarding suicide contact any of the following outlets:

What type of communicator are you?

Safety: A key component in any good holiday celebration

Plan A versus Plan B