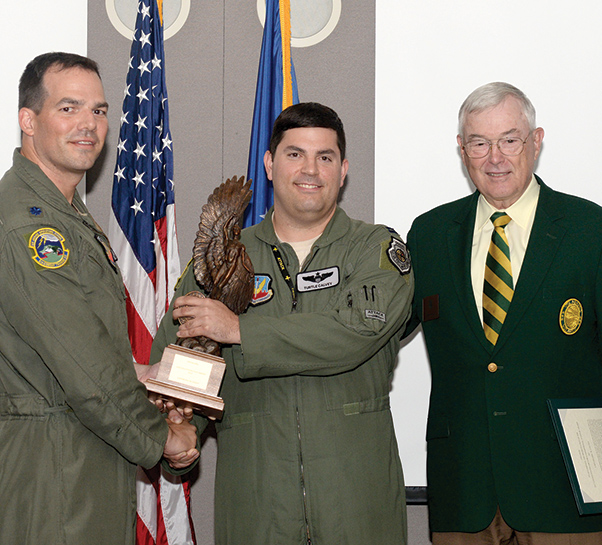 “Being the U.S. Air Force recipient of this award is quite an honor, though I really am accepting the award on behalf of the professionals in the 74th Expeditionary Fighter Squadron and the A-10 community in general,” said Calvey. “The entire operational and maintenance support structure plays a role in getting our aircraft airborne, the weapons we need to accomplish the mission and return home safely. The ingenuity of everyone in the unit to solve continuously evolving tactical problems over the course of the deployment is what makes our squadron so successful and is what, I feel, this award is truly about.”

Facing deteriorating weather, jammed communications and a malfunctioning target pod, Calvey seized the initiative by completing a series of reconnaissance scans, integrating a remotely piloted aircraft to identify and differentiate between friendly and enemy positions, while building a picture of the complex battle field. 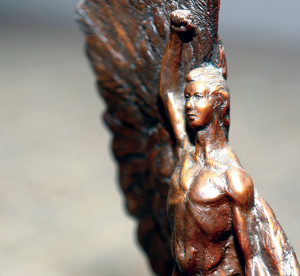 A Daedalian trophy sits at the Air Force Exceptional Aviator Award ceremony in the 6th Combat Training Squadron auditorium on Nellis AFB, Nev., Oct. 5, 2018. The Daedalian trophy is presented to an aviator who assures mission success, acts of valor, or an extraordinary display of courage or leadership in support of air operations.

“Captain Calvey’s nomination is similar to the nominations from all the services in previous years,” said Nicholas B. Kehoe, President of the Congressional Medal of Honor Foundation. “What stood out to me was his willingness to accept responsibility for supporting the ground forces under serious fire despite all the uncertainties and obstacles associated with the situation they faced, such as bad weather, communications problems, among others.”

“I’m confident that any other aviator in my unit would have fought with the same intensity and affected the battle in a positive manner on that day if placed in the same situation as I was,” said Calvey.