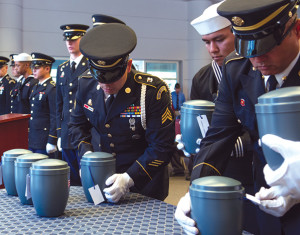 U.S. Army National Guard, U.S. Navy, and U.S. Air Force Honor Guard collect the remains of 12 military veterans and one military spouse for transfer to their final resting place during the Missing in Nevada ceremony, Oct. 9, 2018, Southern Nevada Veterans Memorial Cemetery, Boulder City, Nev. The purpose of the Missing in America Project is to locate, identify and inter the unclaimed cremated remains of American veterans through the joint efforts of private, state and federal organizations.

BOULDER CITY, Nev.— Funerals honor the deceased and bring solace to the living.

For military veterans, funerals can include military honors, upon family request.

But what if a person’s remains are left unclaimed or there is no family?

It was the second “Missing in Nevada” ceremony held in southern Nevada. Others have been held around the state, including one in Fernley on Oct. 12.

As the white hearse came to a stop in front of the cemetery hall, the Nevada Guard Honor Guard — in white gloves and full-service dress — formed two lines behind the vehicle and meticulously removed a flag-draped casket containing the cremated remains of 12 American veterans and one veteran’s spouse.

During the ceremony, Sgt. 1st Class Shawn Fidler, of the Nevada National Guard Honor Guard, gave the command and the eight pallbearers moved in unison.

At the front of the hall, each urn was placed one by one onto the stand.

Outside the hall, the Disabled American Veterans, Chapter 12 Honor Guard stood in line formation and proceeded to fire ceremonial rifles in a three-volley salute — a ceremonial act performed at military funerals. 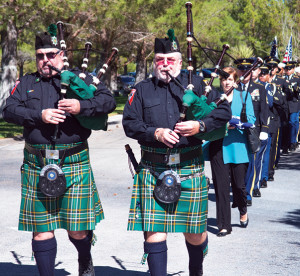 Service members from all four branches of the military collected the individual urns and joined a procession in front of the hall, led by the Nevada Patriot Guard Riders. Two members of the Las Vegas Emerald Society played “Amazing Grace” on bagpipe.

It was a somber moment as each service member presented a veteran’s remains for burial and honored them with one final salute. A flautist gently played “Taps” as the urns were placed.

One of the veterans interned, Lyle Prescott, served in the U.S. Army in World War I and passed away in 1948 — more than 70 years ago.

“As an American citizen and as a veteran, I feel somewhat ashamed that it took this long for us to do this,” said Ramiro Parocua, commander of the Black Mountain Chapter of the Disabled American Veterans’ Honor Guard. “We do the honors for everyone … you put on the uniform, you serve your country, you deserve it.”

The Disabled American Veterans sponsored and coordinated the services for more than 150 unclaimed veterans in 2017.

For more information on the Missing in America Project, visit www.miap.us.

Nellis shows it is Vegas Strong