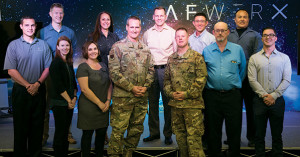 Airmen from units assigned to the U.S. Air Force Warfare Center at Nellis Air Force Base, Nev., gathered at AFWERX-Vegas Oct. 29 to present their innovative ideas for the 2019 Spark Tank Competition.

Gersten spoke to the teams after the presentation, emphasizing the importance of a culture of innovation in all facets of the Air Force.

“This is what AFWERX is all about. It’s just as much about the operational stuff as it is about taking care of our people and I’m excited to see both ends of the spectrum presented here.” said Gersten, foreshadowing which two ideas would be selected. “I applaud each team for the work they’ve done on their ideas to enhance our Air Force,”

The two teams selected to advance were from the the 59th Test and Evaluation Squadron (TES) and the 99th Medical Group, both stationed at Nellis Air Force Base, Nevada.

“AFWERX is the perfect outlet to give our idea exposure at the Air Force-level to get a decision,” said Lt. Col. Justin Elliott, 59th TES director of operations. “Whether that decision is a go or a no-go, we will still have a better understanding of which direction we should take.”

The new boxes will allow flight data collection from every aircraft in the Air Force instead of just those assigned to test units, which will enable software updates to be pushed more quickly than the current timeline, which can take years.

The other team selected to advance was from the 99th Inpatient Operations Squadron Maternal Child Care flight. They propose creating a family-centered natural birthing suite for low-risk mothers by refurbishing an existing room into a more holistic, natural environment.

“We went through the Spark Tank AFWERX route to bring more attention to this innovative idea that is already being utilized in the civilian world,” said Capt. Renee Millmine, 99th IPTS maternal child care flight element leader. “We need to be offering the same, if not more, to be competitive and retain our members.”

Millmine said the feedback they received at AFWERX helped narrow their focus, improve their presentation and incorporate more data into their proposal.

AFWERX expedites the process for ideas to come to fruition by getting them in front of people who can decide whether to run with the idea or to re-work it.

“AFWERX brings these ideas and prototypes to life,” said Hoffman. “One of the ways we incentivize innovation is by providing everyone with the tools to help these ideas become reality.”

The two teams will go on to compete against other teams in ACC before making it to the final competition at the Air Force Association Air Warfare Symposium in 2019.