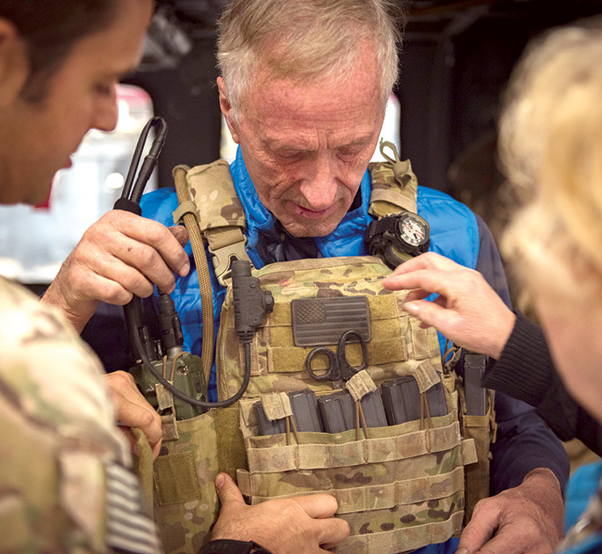 Spencer Cottam tries on a tactical vest in the 823rd Maintenance Squadron hangar at Nellis Air Force Base, Nev., Nov. 16, 2018. Having taken part in multiple rescues as a civilian, Spencer described the 66th Rescue Squadron as one of the most professional and precise rescues he has ever seen. Spencer visited the 66th RQS with his nephew Dr. Daniel Cottam, following Dr. Cottam’s rescue after a fall near Zion Canyon left him severely injured.

One month after his life flight rescue from Zion National Park, Daniel Cottam visited his rescuers at the 66th Rescue Squadron Nov. 16 at Nellis Air Force Base, Nev.

Cottam suffered injuries when his rope gave way while hiking, sending him down a steep cliff face requiring pararescuers to rappel more than 100 feet to evacuate him from the narrow canyon.

“I know enough about what is going on that the pilots and the rescue crew did place themselves at significant risk to come down into that canyon to get me,” said Cottam. “I knew how professional they were to get that done and then get me out safely. They deserved a thank you.”

Cottam’s wife and uncle, who were also hiking with him, spent four additional hours hiking and climbing in search of a phone signal. Finally, they were able to call for help and rescuers arrived shortly after. The team that arrived didn’t have the necessary equipment to perform the rescue and had to call for additional backup. 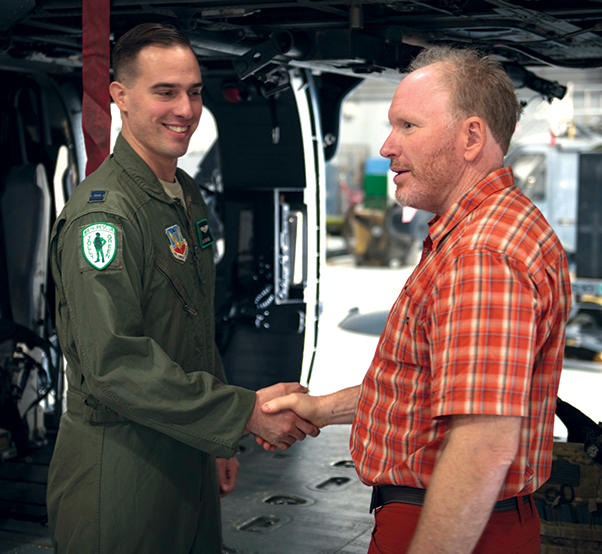 Capt. Ben Gransee, 66th RQS HH-60G Pave Hawk helicopter pilot, said they got the call around 7:45 pm from the local sheriff. It took about 90 minutes to assemble the personnel and get the helicopter ready to rescue Cottam.

Cottam spent about nine hours in the canyon while temperatures plummeted as the sun dropped behind the sheer cliff walls.

“When I saw the helicopter come over the edge of the canyon, it was like seeing an angel,” said Cottam.

The crew had only 10 feet of clearance on each side of the helicopter blades, leaving little margin for error.

“In a training environment we wouldn’t go any closer than 25 feet to an obstacle,” said Gransee. “So to put yourself in a canyon hundreds of feet deep, only to have 10 feet on each side of the helicopter, it comes down to the skill of the pilot and the skill of the crew to work as a team.” 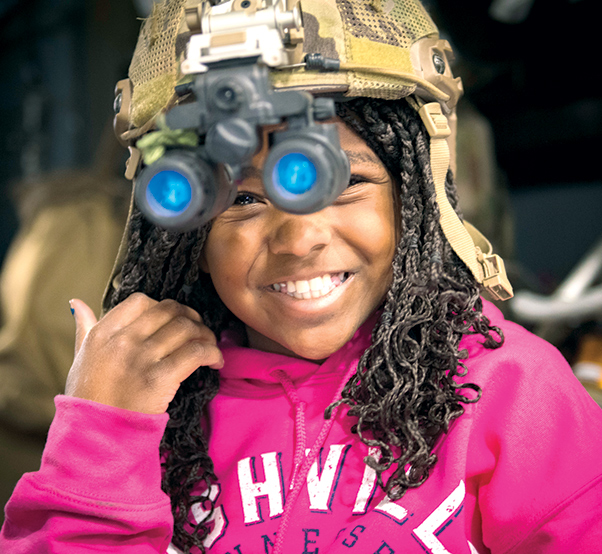 Ruth Cottam tries on a helmet from the 66th Rescue Squadron at Nellis Air Force Base, Nev., Nov. 16, 2018. Ruth’s dad, Dr. Daniel Cottam, was rescued by the 66th RQS when he suffered multiple broken bones from a hiking accident near Zion Canyon, Utah. 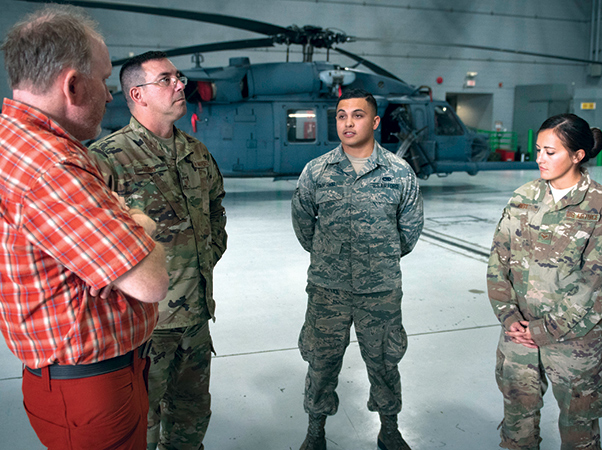 Dr. Daniel Cottam talks to Airmen assigned to the 823rd Maintenance Squadron at Nellis Air Force Base, Nev., Nov. 16, 2018. The airmen were part of the team who launched the helicopters that rescued Cottam after a hiking accident.