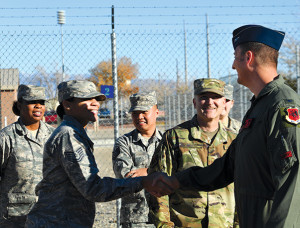 Col. Julian Cheater, 432nd Wing/432nd Air Expeditionary Wing commander shakes the hand of Tech. Sgt. Krystal, NCO in charge of career development assigned to the 799th Air Base Squadron during the recreational vehicle grand opening ceremony at Creech Air Force Base, Nev. Dec. 3, 2018. The lot has about 70 spaces for Airmen to store their RVs. If Airmen choose to move their vehicles from the Nellis AFB parking lot to Creech, their rent for the first month will be free.

The lot is considered Creech’s first morale, welfare and readiness facility, and will allow Creech personnel the option to store their RVs on the base.

The addition is a result of an on-going initiative by 432nd Wing/432nd Air Expeditionary Wing leadership to provide traditional base services for Creech Airmen.

“When I first arrived to Creech AFB two years ago, I realized we did not have any MWR facilities on the base” said Capt. Brittany, 799th Air Base Squadron, Force Support Flight commander. “With leadership’s drive for quality of life and Creech AFB standing up as their own installation in 2019, this is the first step to help establish more of an enduring operation here.”

There will be 70 spaces available for Airmen to utilize and if Airmen choose to relocate their vehicles from the Nellis Air Force Base RV lot to Creech, their first-month’s rent will be free.

“The RV storage lot has a low operating cost which allows it to generate more revenue,” said Brittany. “The revenue generated is going to be used toward funding a civilian position to operate a satellite FSS Community Commons office at Creech.”

The office is scheduled to open sometime in January. It will allow Airmen to purchase tickets, rent equipment from the Nellis Outdoor Recreation office, make reservations for the RV lot, and take advantage of other beneficial services.

Brittany said having the office at Creech will make it more convenient for Airmen to enjoy resources typically offered at Nellis and other traditional bases.

Most first-term Airmen who are stationed here as their first base live on Nellis and commute to Creech every day. Because of this, they miss out on most recreational services offered there during normal business hours.

“That’s why leadership is pushing so hard to establish more of a community here, rather than just work and mission. They understand that quality of life plays a significant factor in an Airman’s decisions to remain in the Air Force and they want to retain that talent as much as possible,” Brittany explained.

Creech members support a non-stop mission with less infrastructure than most operational installations. That will inevitably change sooner, rather than later, as services that aim to enhance the base’s culture and support the Hunter mission begin to emerge on the horizon.