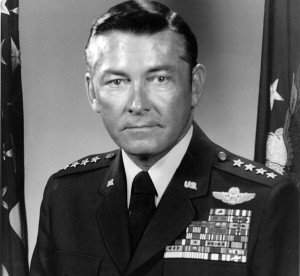 General Creech was born in Argyle, Mo., on March 30, 1927. His first experience with the military was when he enlisted as a private in July 1944 after graduating from Emmetsburg (Iowa) High School. He earned a bachelor of science degree from the University of Maryland, a master’s degree in international relations from The George Washington University, and graduated from the National War College in 1966. He received his wings and commission in September 1949 as a distinguished graduate of flying training school.

His first operational assignment was with the 51st Fighter Wing at Naha, Okinawa. During the Korean War he flew with the 51st Wing from Kimpo Air Base and completed 103 combat missions over North Korea. He also served a combat tour of duty as a forward air controller with the U.S. Army’s 27th Infantry Regiment, 25th Infantry Division.

In July 1951 General Creech was assigned as a flight commander at Luke Air Force Base near Phoenix, Ariz., where, for the next two and a half years, he taught advanced gunnery to students from 14 nations. In November 1953 he joined the U.S. Air Force Aerial Demonstration Team, the Thunderbirds, and flew 125 official aerial demonstrations over the United States and Central America.

In January 1956 he became commander and leader of the U.S. Air Forces in Europe Aerial Demonstration Team, the Skyblazers, based at Bitburg, Germany. By December 1959 he had flown 399 official aerial demonstrations with this team throughout Europe, North Africa and the Middle East.

In June 1960 General Creech was named director of operations, U.S. Air Force Fighter Weapons School at Nellis Air Force Base, Nev., where he served until February 1962. He then was assigned as a special adviser to the commander of the Argentine air force in Buenos Aires.

From August 1962 to August 1965, he was executive and aide to the commander of Tactical Air Command, Langley Air Force Base, Va. In August 1965 he entered the National War College at Fort Lesley J. McNair, Washington, D.C. Upon graduation in June 1966, he was selected to be a staff assistant in the Office of the Secretary of Defense.

Creech transferred to the Republic of Vietnam in November 1968 as deputy commander for operations of the 37th Tactical Fighter Wing, Phu Cat Air Base. After six months with the wing, during which he flew 177 combat missions, he became assistant deputy chief of staff for operations, Headquarters 7th Air Force in Saigon.

In November 1969 General was assigned to U.S. Air Forces in Europe and successively commanded two tactical fighter wings. After one year as commander of the 86th Tactical Fighter Wing at Zweibrücken, Germany, he became the commander of the 401st Tactical Fighter Wing at Madrid, Spain. From August 1971 until August 1974, Creech served as deputy chief of staff for operations and intelligence, Headquarters U.S. Air Forces in Europe at Wiesbaden and Ramstein, Germany.

After two and a half years as commander of Electronic Systems Division, Creech was transferred to Washington, D.C., where he served concurrently as the assistant vice chief of staff, assistant to the Chief of Staff for Readiness and North Atlantic Treaty Organisation matters and senior U.S. Air Force member, Military Staff Committee, United Nations.

During his tenure as commander of TAC, Creech pushed for the development of high-technology weapons systems that could overcome the expected numerical superiority of the Warsaw Pact forces. He championed the ‘roll back’ doctrine that focused on the suppression of enemy air defense as the initial priority, progressing from the front to the enemy’s rear area to remove the threat to attacking aircraft and reduce the need for the low-level penetration tactics otherwise required to evade integrated air defense systems. In order to do this, he promoted the development and fielding of long-range weapons that could be used day and night and in all weather. An example of this was the “Enhanced Tactical Fighter” program that resulted in the production of the F-15E Strike Eagle all-weather long-range strike fighter. Other examples were the AGM-65D Maverick all-weather imaging infrared ground-attack missile and the LANTIRN integrated navigation and targeting system. Creech kept in place the realistic training program implemented under previous leadership, but with an added emphasis on flight safety.

He was a command pilot, experienced in 40 different military fighter, cargo and reconnaissance aircraft.