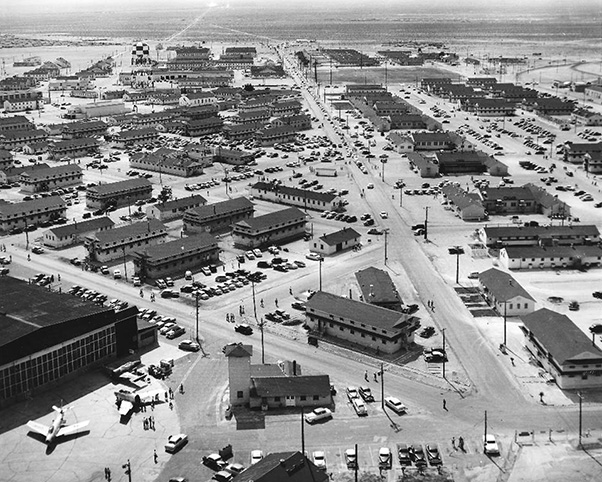 The first airport in Las Vegas was Anderson Field, opened in 1920 on the southeast corner of what is now Sahara and Paradise. It was renamed Rockwell Field in 1928 and the lease expired in 1929.

What we now know as Nellis Air Force Base traces its physical origins to a new airfield built in 1929 by W.A. “Pop” Simon eight miles northeast of Las Vegas along US 91, the Salt Lake City Highway. This was initially known as the Las Vegas Airport.

In 1933, the airfield was bought by Western Air Express, and was a primary passenger and mail stop on the Los Angeles-Salt Lake City route.

In the fall of 1940, the airfield was surveyed for use as an Army Air Forces Flexible Gunnery School to teach aerial gunners, who would fly the B-17 Flying Fortress into combat. The city of Las Vegas bought the field on Jan. 2, 1941, for $10, and on Jan. 5, 1941, the U.S. Army leased the field. Initially, the airfield was a dual-use facility with one side operating as McCarran Airport. Construction on the military side started in March 1941, and Las Vegas Army Air Field was dedicated in October of 1941. The first class started training January 1942. 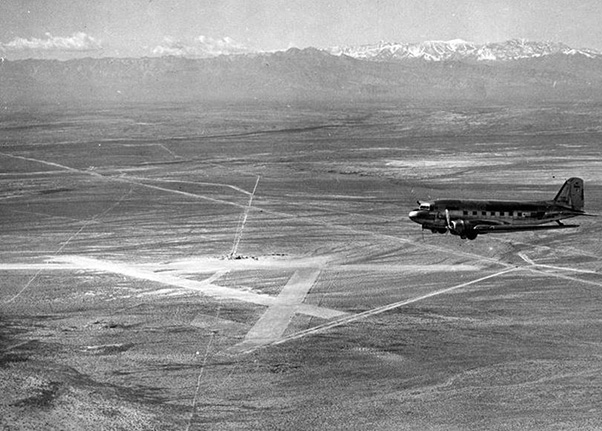 Located next to California but not too close (in case the Japanese attacked), it had a decent road and rail network. Nevada was mostly very empty Federal land, useful for ground training ranges with good flying weather and ideal for training that required lots of open airspace. There were, however, some mining claims and grazing on federal land that had to be resolved for safety and military security reasons.

On the flipside, few people and small towns meant people had to move here to build the bases. Additionally, there wasn‘t a lot of housing or other services for workers, or the troops and their wives and families. The problem was worse in the Las Vegas area with the Basic Magnesium Plant in nearby Henderson in operation.

Almost 60,000 men trained as B-17 and B-29 gunners during World War II, initially with AT-6s and obsolete B-10s, later replaced by B-17s and TB-25s and then, in early 1945, highly modified TB-24s with B-29 gun turrets and fire control radar. Advanced training was conducted at Indian Springs Sub-Post, using airspace over the 3-million acres of the Tonopah and Las Vegas Bombing & Gunnery Ranges shared with Tonopah Army Air Field, now Nye County Airport. 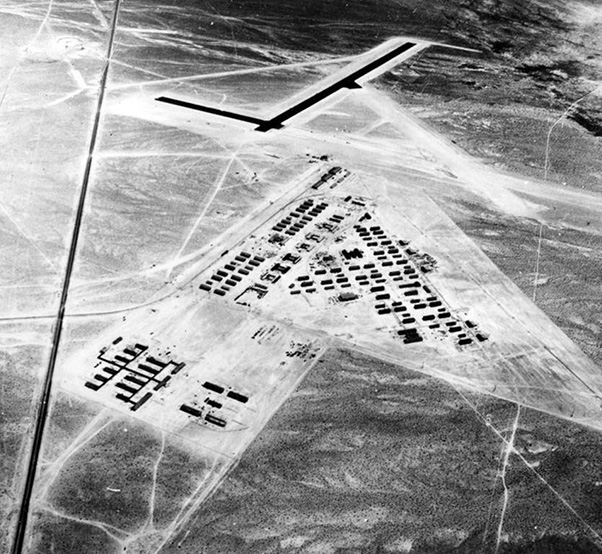 In July and August of 1942, the base hosted Ronald Reagan and Burgess Meredith as they starred in the movie The Rear Gunner.

Initially, upon reopening, Las Vegas AFB hosted advanced aviation cadets who were training to fly jet fighters, and the first gunnery meet was hosted in May 1949. It was during this timeframe that the U.S. Air Force Aircraft Gunnery School opened.

On May 1, 1950, the base was renamed Nellis AFB in honor of 1st Lt. William H. Nellis, a P-47 pilot from Las Vegas killed near Bastogne, Belgium, during the Battle of the Bulge. During this time, the mission changed to post-graduate fighter pilot gunnery training just as the Korean War started.

A hangar is under construction at the Las Vegas Army Air Field. This is now the Thunderbird Hangar.

In July of 1949, Indian Springs Sub-Post reopened to support the pilot gunnery training at Las Vegas/Nellis AFB. In early 1951, the sub-post was redesignated Indian Springs AFB. As well as supporting training at Nellis, Indian Springs also hosted personnel and aircraft supporting the atomic testing at the Nevada Test Site. The Nevada Test Site (today’s Nevada National Security Site) had been carved out of the Tonopah and Las Vegas Bombing and Gunnery Ranges in 1951. Between 1952 and 1961, Indian Springs AFB was assigned to the Air Research and Development Command and, while assigned to ARDC, Nellis AFB maintained a support detachment at the base to manage use of the gunnery ranges between the atomic tests.

On Jan. 26, 1953, the military announced the creation of Lake Mead Base (now known as Area II). Construction of the depot was completed in September 1954, and was manned by 1,000 Navy and Marines Corps personnel. In 1969, the facilities transferred to the U.S. Air Force.

By the end of the Korean War, a second runway was added at Nellis and the original runway and ramp were both extended.

From the end of the Korean War through 1966, one principal mission at Nellis was training fighter pilots in basic and advanced skills with the F-86, F-100 and F-105 aircraft.

The other primary mission was gunnery and weapons training and testing conducted by the Fighter Weapons School. Since then, the weapons school mission has grown. Originally only open to fighter pilots, weapons controllers were added in 1984 and intelligence officers in 1998. The school has continued to expand, adding bombers in 1992, rescue helicopters in 1995, and more recently courses in space operations and mobility operations. 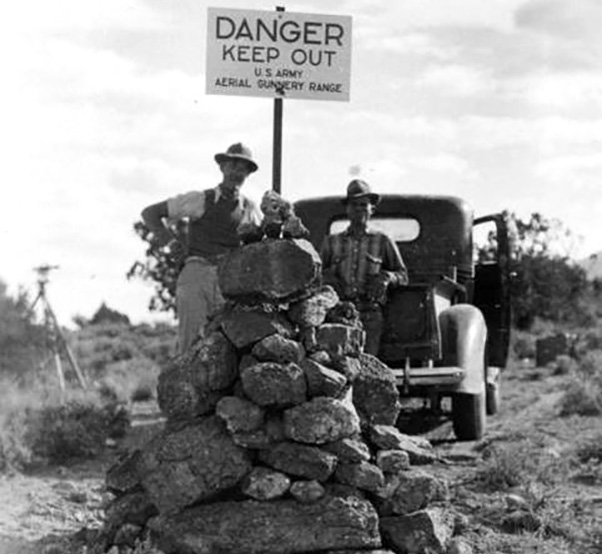 Gunnery ranges, including those along the Sheep Mountains, needed to be surveyed and marked.

In 1956, the U.S. Air Force Thunderbirds aerial demonstration team converted from the F-84F Thunderchief to the F-100C Super Sabre — giving the team supersonic capability. The conversion was also accompanied with a relocation from Luke AFB, Ariz., to their new home at Nellis AFB.

On Dec. 31, 1956, F-86 training at Nellis was discontinued. On July 1, 1958, the base and mission transferred from Air Training Command to Tactical Air Command and the 3595th Combat Crew Training Wing (Fighter) was redesignated the 4520th Combat Crew Training Wing (Tactical Fighter). On Aug. 1, 1960, the first F-105 (a D model) was delivered to Nellis AFB and assigned to the Fighter Weapons School.

On Oct. 4, 1962, T-33s and F-86s return to Nellis as it reassumed training foreign pilots in the Military Assistance Program.

On Jan. 1, 1966, the U.S. Air Force Fighter Weapons School was redesignated from a named activity to a named unit, assigned to the 4525th Combat Crew Training Wing, later becoming the 57th Fighter Weapons Wing (now the 57th Wing). Also in 1966, the F-105 operational training mission left in preparation for a new mission. 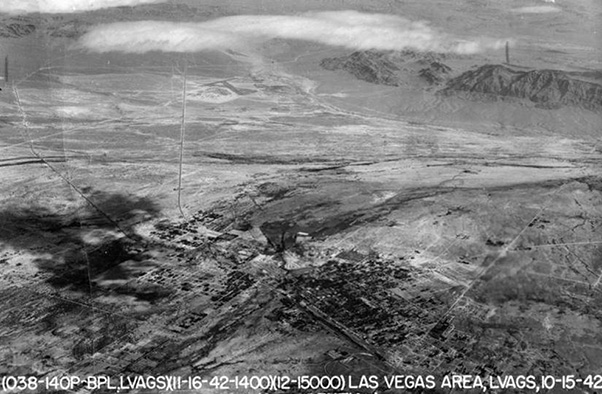 The Las Vegas Army Air Field/McCarran Airport front gate circa 1942. The pillars are now in front of the public aviation entrance to McCarran International Airport on Las Vegas Boulevard.

In January 1968, the 474th Tactical Fighter Wing, a combat ready deployable fighter wing moved to Nellis with the F-111. This also brought another new mission to Nellis with Operational Test & Evaluation for the F-111; the OT&E mission continues today with the 53rd Wing. The 474th TFW was at Nellis AFB from 1968-1989 flying the F-111, the F-4 and then the F-16A before inactivating.

In October 1972, Nellis AFB added to its mission, activating the 64th Fighter Weapons Squadron as an Aggressor squadron and hosting the first Red Flag training exercise over the Nellis Range in November 1975. Initially operated F-5 aircraft (the F-5 was quite similar in size and handling to the Soviet fighters of the time such as MiG 19s and MiG 21s), derived from the T-38, the Aggressors simulated the Soviet aircraft performance and tactics of the day, switching to F-16s in 1990. Initially fighter-only exercises, today’s Red Flag exercises train in air, space and cyberspace with U.S. and allied air forces.

In the early 1980s, two classified missions took up residence on the Test Range. First was Constant Peg, with the 4477th Test and Evaluation Flight (later Squadron) whose pilots studied and operated a number of Soviet fighter jets acquired through various means and then flying them against selected U.S. Air Force, U.S. Navy and U.S. Marine Corps pilots to train them against jets they might see in combat. The unit was disbanded in 1990.

In 1984, the F-117 stealth fighter, operated by the 4450th Tactical Group moved to Tonopah, training in secrecy until unveiled to the public in 1989. After Desert Storm, they relocated to Holloman AFB, N.M., until the aircraft was retired in 2008.

Las Vegas Army Air Field circa 1942 looking to the northeast from Las Vegas.

Another major exercise was added in 1990 when Air Warrior, now Green Flag West, transferred from George AFB, Calif. Green Flag West is an air-to-ground exercise designed to train Air Force units in ground support operations with the Army at their National Training Center at Fort Irwin, Calif., in the Mojave Desert.

The importance of Indian Springs AFB, later Air Force Auxiliary Field, slowly declined as nuclear weapons testing went underground after 1962, although it served as a training area for the Thunderbirds each winter. In 1981, a new school called the Tactical Combat Arms School was started on Range 63A, followed by Silver Flag Alpha, for training air base defense in a desert environment with Indian Springs as their support area. The schools were merged in 1982 and operated continuously under several names until the 99th Ground Combat Training Squadron inactivated April 1, 2015.

In 1996, unmanned aerial vehicle operations started at then-Indian Springs AFAF under the 57th Operations Group. From reconnaissance-only aircraft to today’s MQ-9 Reapers, the mission expanded to the point where the 432nd Wing/432rd Air Expeditionary Wing was activated in 2007 to focus on this mission. 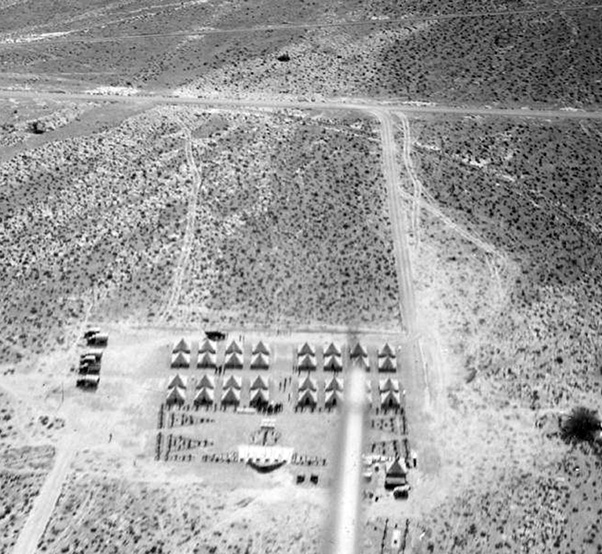 In 1942, Indian Springs was a collection of tents and graded runways but too much dust closed it by March 1942. Runways were built and a cantonment area for 1,000 staff and students was constructed and open by April 1943.

Indian Springs AFAF was renamed Creech Air Force Base on June 20, 2005, honoring Gen. Wilbur L. “Bill” Creech, an early Thunderbird pilot and later the Fighter Weapons School Director of Operations before commanding Tactical Air Command, May 1, 1978, to Nov. 1, 1984. He passed away in August 2003.

The physical area of the Nevada Test & Training Range of almost 3 million acres traces its history back to the Tonopah and Las Vegas Bombing and Gunnery Ranges in World War II. A combination of land owned by the military and Bureau of Land Management lands set aside by Congress over the years, ranges and training aids have been regularly improved to ensure training over the range remains the most realistic possible.

The training and testing missions have continued to evolve; today, Nellis AFB hosts the USAF Warfare Center, six wings and more than 50 tenant units and activities. 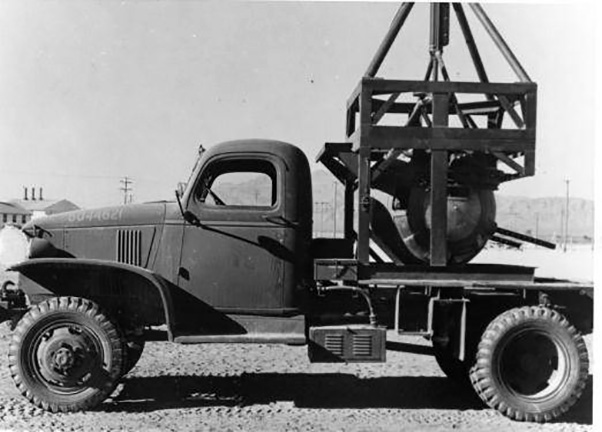 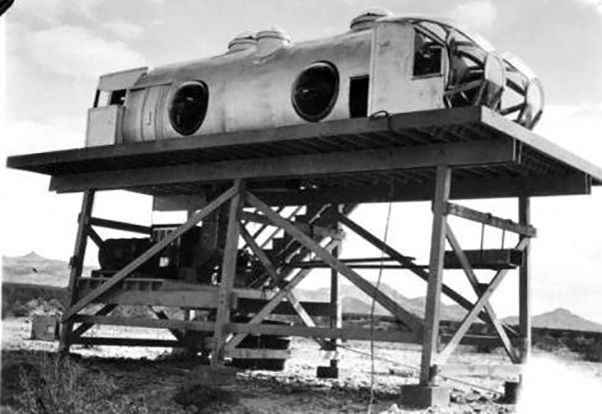 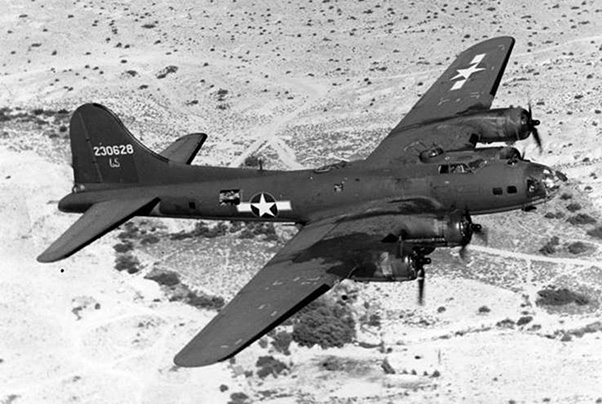 The first Boeing B-17E Flying Fortress arrived at Las Vegas Army Air Field on Aug. 28, 1942. Initially, it was only used for ground training, but by December 1942, B-17 co-pilots were also being trained as a byproduct of the gunnery training missions. 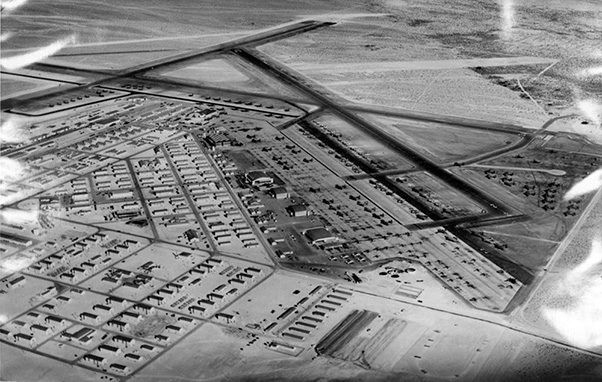 Las Vegas Army Air Field, circa 1945. The base closed in December 1946, but reopened in January 1949 after commercial services had moved to the current McCarran International Airport. 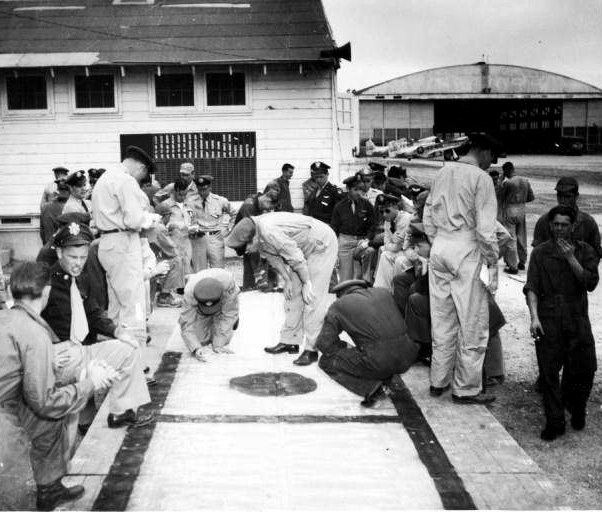 Scoring targets during the 1950 gunnery meet at Las Vegas Air Force Base.

Two 240mm Atomic Cannon sit at Nellis AFB, May 8, 1953. A nuclear blast cloud can be seen in the in background. 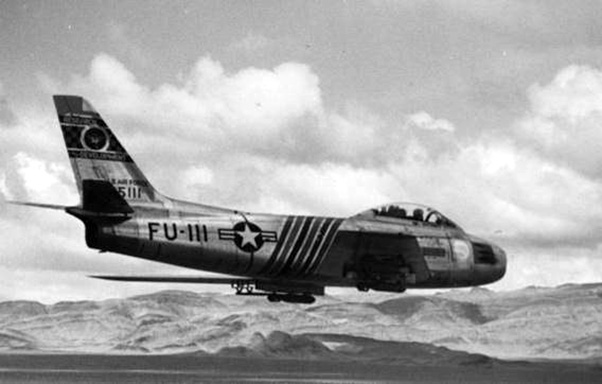 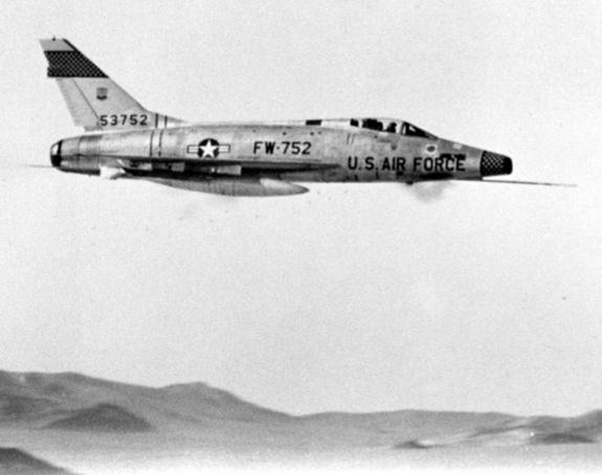 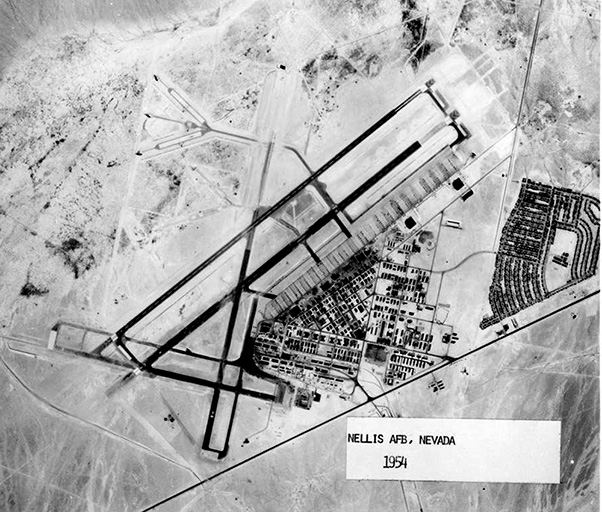 By the end of the Korean War, a second runway was added and the original runway and ramp were both extended. 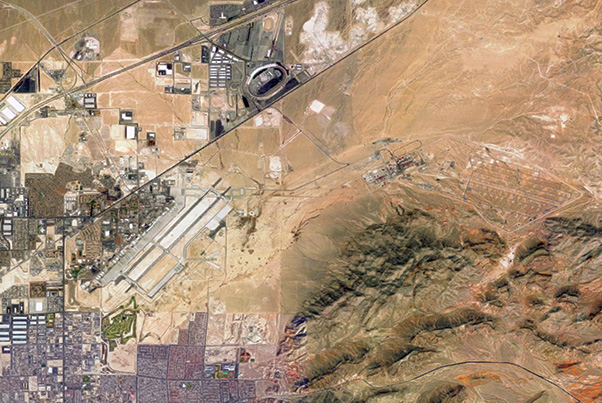 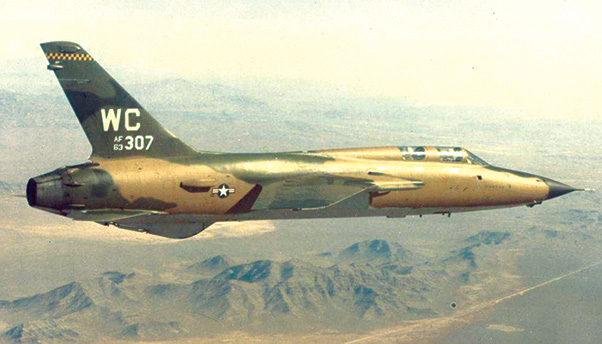 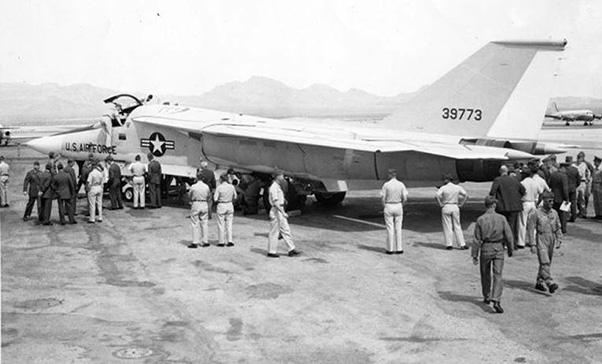 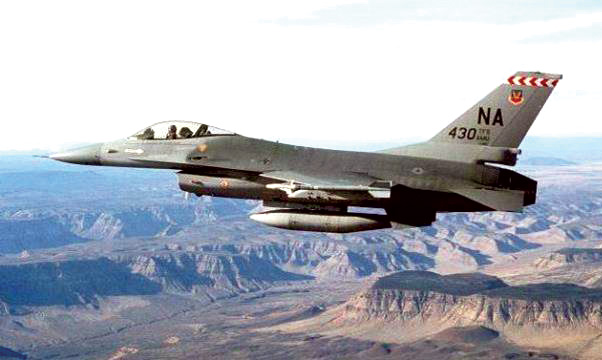 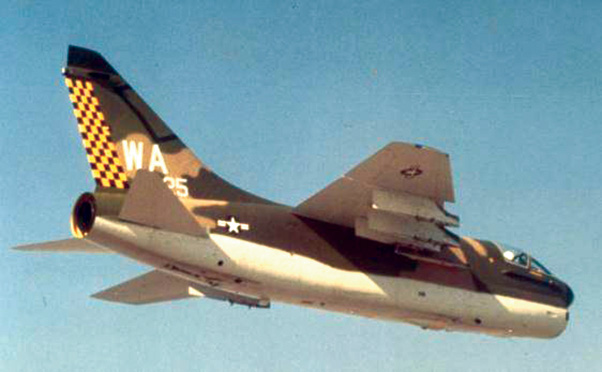 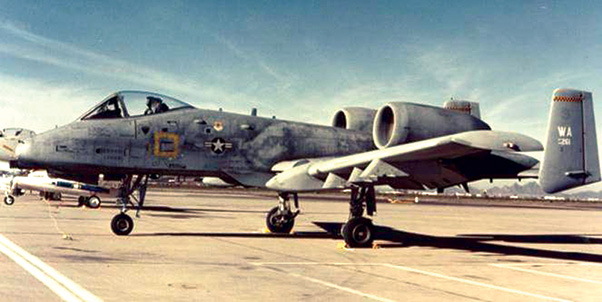 1977-Present: The A-10 Thunderbolt II, commonly referred to as “The Warthog.” 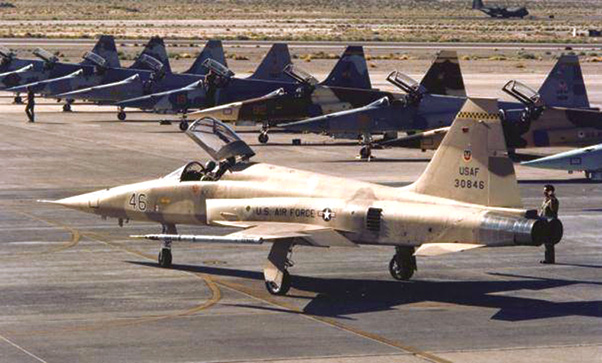 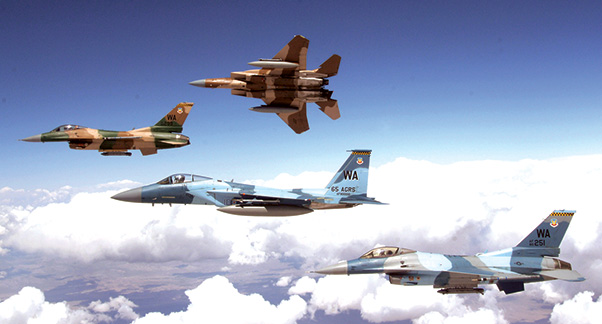