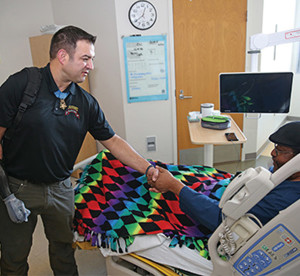 When Retired Army Master Sgt. Leroy Petry first meets you, he gives you a warm smile and a firm handshake.

The 39-year old extended the same greeting to dozens of veterans during his visit to the VA Southern Nevada Healthcare Service Medical Center in December. And while his smile is genuine, his right hand is an advanced prosthetic.

Petry is quick to ask each veteran about their service, share his excitement about the Army football team’s win against rival Navy, and demonstrate the incredible dexterity of his prosthetic hand. It’s only when asked about the medal around his neck that Petry shares his own story.

Leroy Petry is the second living recipient of the Medal of Honor. He received the highest military honor because of his heroic actions as an Army Ranger fighting in Paktya province of Afghanistan in 2008.

While clearing a house with high-priority targets, then-Staff Sgt. Petry and his team were ambushed. In the ensuing firefight, SSG Petry took an AK-47 round through both legs, yet still led two of his soldiers to cover in a chicken coop. While returning fire despite his injuries, a grenade went off nearby, which blew he and his team back and further injured them with shrapnel. When a second grenade landed next to his wounded soldier, Petry picked it up and threw it back. The grenade detonated just after leaving his hand, amputating his arm above the wrist and peppering him with shrapnel. He still maintained the presence of mind to apply his own tourniquet, communicate for reinforcements, and continue the fight. Petry was evacuated and, once stabilized, flown to San Antonio for recovery and treatment. Despite his injuries, Petry continued to serve as an active-duty soldier until his medical retirement in 2014.

Petry’s injuries left him with an amputated right arm, just above the wrist, but with the help of prosthetics, has been able to do many of his favorite activities like cooking and golf.

“You’re never going to get back to where you were before your injury, Petry said. “But you need to set achievable goals for yourself and find a new normal.”

And it’s these lessons that have provided the retired soldier with a new mission: to connect with other veterans around the country. “We’re terrible advocates for ourselves,” Petry said. “But we will go out of our way to do anything for others.”

He toured the Inpatient Care Unit, sharing stories with veterans, giving them some laughs, and presenting them with his gratitude and a challenge coin. Petry met with VASNHS Prosthetists and discussed ways that the VA can help to better serve veterans with prosthetic needs. “Many hospitals don’t have the facilities that you have here, and your staff are very knowledgeable,” he remarked.

“Master Sergeant” Petry may have retired, but he still “bleeds green.” He proudly wears his Ranger tab on his polo shirt and his prosthetic is adorned with a plaque inscribed with the names of his brothers-in-arms who made the ultimate sacrifice.

He remains light-hearted in his interactions with his fellow veterans. “My favorite way to break the ice,” Petry says, as he rotates his prosthetic hand 360 degrees. “It’s usually good for a laugh.”

On his first Halloween following his injury, Petry took his child trick-or-treating dressed as a pirate, replete with perquisite hook. He even shared a laugh with his fellow Medal of Honor recipients at the award ceremony. “One of guys warned me that your hand would get sore from shaking so many hands,” Petry said. “I held my hand up and said ‘worst thing that can happen to me is that I will run out of batteries.’”

Through his use of humor, humility, and a genuine caring attitude, Leroy Petry is continuing to serve veterans.