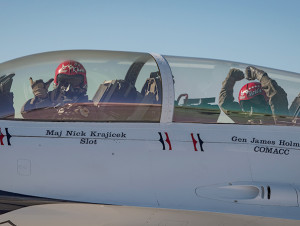 Maj. Nick Krajicek, a pilot assigned to the U.S. Air Force Air Demonstrations Squadron, and Gen. Mike Holmes, the commander of Air Combat Command, cheer before take-off Jan. 9, 2019, at Nellis Air Force Base, Nev.. This was Holmes first flight with the USAFADS.

The commander of Air Combat Command spoke about the future of Nellis Air Force Base, Nev., and the Nevada Test and Training Range while hosting the Combat Air Force Weapons and Tactics Conference Jan. 7-18.

WEPTAC is an annual, two-week conference to bring together warfighters to discuss current issues, to look at future issues, and to provide solutions for joint and coalition air forces.

“We’re transitioning in our Air Force that was focused on fighting violent extremist, terrorists and low-tech militaries around the world to an Air Force that’s focused on combating peer adversaries from the systems they build or sell,” said Gen. Mike Holmes, the ACC commander.

Furthermore, Holmes went on to emphasize the significance of Nellis preparing for future conflicts against higher-end oppositions.

“Nellis is where we’re leading that transition,” said Holmes. “Here is where we focus on that training against that higher-end adversary, and where we’re developing new tactics and new capabilities to shift into the future.”

Holmes also stressed the significance of the NTTR, a vital resource for the training conducted at Nellis, and how it will be used to train for tomorrow’s adversaries.

“The NTTR is a national asset because it is the one place in the U.S. where we can train and be free of the national transportation structure,” said Holmes. “What is going to happen as we move forward into the future is improving the threats we can replicate. We’ll be upgrading the ground threats, air threats, and command and control to tie the range together to make sure it emulates that threat we are trying to train against.”

Additionally, Holmes recognized the important of the contributions Nellis provides to the Air Force.

“One of the great things about being at Nellis is it’s a place where our past, present and future come together,” said Holmes. “You’re in the middle of all this heritage that goes all the way back to World War ll but trained by all the guys that were Aces back in the Korean War.”

Finally, Holmes talked about the people who make Nellis what it is and the vital role each Airman contributes to the Air Force mission.

“Whether you’re making ID cards or taking blood at the hospital, you do it so we can be the best Air Force in the world,” said Holmes. “It is so we can control and exploit the air and space. So, thank you for everyone who takes part.”

Nellis has kept its legacy throughout the past 78 years, and it will continue to adapt to the new challenges faced in air, space and cyberspace domains.

Please give tomorrow a chance