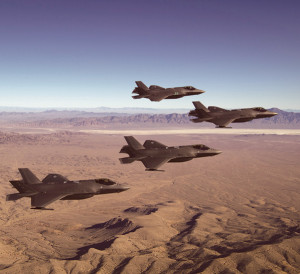 A formation of F-35A Lightning IIs, from the 388th and 419th Fighter Wings, fly over the Utah Test and Training Range. As the first combat-ready F-35 units in the Air Force, the 388th and 419th FW at Hill Air Force Base, Utah, are ready to deploy anywhere in the world at a moment’s notice.

Pilots and maintainers from the 388th Fighter Wing based at Hill Air Force Base, Utah, are bringing the F-35A and ‘increased lethality’ as they take a lead role in Red Flag 19-1 at Nellis AFB, Nev.

From Jan. 26-Feb. 15, approximately 200 Airmen from Hill AFB, including reservists from the 419th Fighter Wing, will participate in what is known as the Air Force’s premier combat training exercise.

“We have an upgraded software suite that has improved our sensor fusion. We’ve got an expanded flying envelope with more maneuverability. We have the ability to employ more weapons, including the 25-mm cannon,” said Lt. Col. Yosef Morris, 4th Fighter Squadron commander. “When you couple those things with the two years we’ve had to improve our tactics, we’re bringing a much more lethal F-35A to this Red Flag and ultimately to the battlefield.”

Pilots and maintainers from Hill AFB will work with other Air Force units flying a variety of aircraft alongside allies from Great Britain and Australia.

Typically, about 2,000 personnel and more than 100 aircraft participate in Red Flag exercises, which take place throughout the year at Nellis AFB.

“Red Flag provides training, especially for some of our younger Airmen, that is hard to replicate anywhere else, just in the size and scope of our missions,” Morris said. “From planning and flying with other units and allied nations, to our maintainers generating sorties at a combat pace in a ‘deployed’ setting, it’s a great learning experience.”

While at Red Flag 19-1, F-35 maintainers will generate multiple sorties and will be challenged to maintain a high ops-tempo during both day and night missions.

The first operational F-35As arrived at Hill in October 2015 and reached initial operational capability in August 2016. The active duty 388th FW and Air Force Reserve 419th FW fly and maintain the jet in a Total Force partnership, which capitalizes on the strength of both components. By the end of this year, Hill AFB will be home to 78 F-35s.