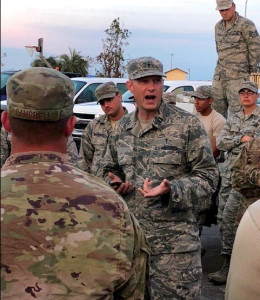 Chaplain (Capt.) Brian with the 432nd Wing at Creech Air Force Base, Nev., speaks with deployed Airmen at Tyndall AFB, Fla., after Hurricane Michael. Brian was among three other deployed chaplains who led religious services and offered spiritual counseling to base Airmen.

As Airmen at Tyndall Air Force Base, Fla., were sifting through the belongings and memories left in the wreckage of their homes, military members from around the country were making their way to the sunshine state to provide support after a Category 4 hurricane.

Hurricane Michael left all of the 867 Tyndall homes and 99 percent of the base’s other buildings damaged.

Chaplain (Capt.) Brian with the 432nd Wing at Creech Air Force Base, Nev., was among those providing guidance for Airmen returning to their homes and life after the hurricane.

“When we’re spiritually fit, all areas of our lives are healthy,” Brian explained. “But in a tragic time, or when deployed, Airmen are away from their families, and it becomes more critical because there’s so much upheaval in their lives. They need that to rely upon. It strengthens them in those difficult moments.”

While families arrived back at Tyndall and struggled to carry water-affected furniture, chapel members would stop to lend a hand. Helping load a sofa onto a trailer often led to talking about the family’s story, their experience, and how they are coping.

“Chaplain (Brian’s) passion is lived out in tirelessly caring for people,” said Chaplain (Maj.) Zachary Nash, deputy wing chaplain for the 633rd Air Base Wing, Joint Base Langley-Eustis, Va. “His character and his enthusiasm and his desire to take care of our Airmen, was just incredible.” 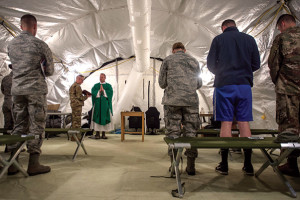 Chaplain (Capt.) Brian with the 432nd Wing at Creech Air Force Base, Nev., leads Catholic Mass at Tyndall AFB, Fla., Oct. 27, 2018. After Hurricane Michael swept the area, multiple major commands mobilized relief assets in an effort to restore operations to the base.

Nash explained that even in moments when they had very little energy left after a long day, Brian still made time for one more Airman, one more commander or one more family when they needed him.

“I was proud to be there and represent Creech,” said Brian. “I was proud of what we do and to tell our story, but I was also proud to join with everyone on that team to do something greater than I could do just by myself or we could as individuals.”

Members of the chapel focused on providing a sense of normalcy on base, and Brian accomplished this through small acts of service during each day of his deployment.

“He impacted Airmen and families the most through the small things,” Nash said. “Such as praying with someone at their house that no longer has a roof and 80 percent of the contents are destroyed, helping someone carry a few belongings out of their house and being able to give them a word of encouragement or point them toward additional resources, and being willing to sit with someone (who is deployed) in the middle of the night who got bad news from home.”

In the midst of immeasurable change and uncertainty, Brian and many other religious affairs Airmen gave Tyndall families the spiritual support they needed to focus on the tangible issues at hand.