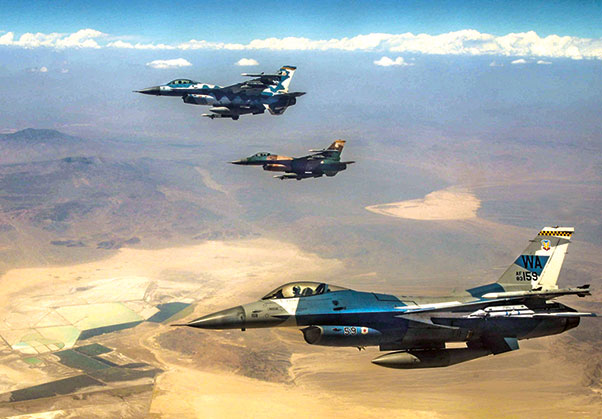 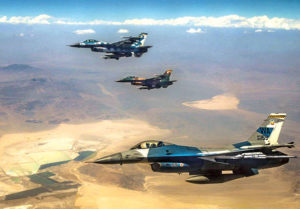 Three F-16 Fighting Falcon fighter jets assigned to the 64th Aggressors Squadron fly over the Nevada Test and Training Range during Red Flag 18-3. The 64th AGRS served as part of the red forces during Red Flag 18-3 to prepare combat air forces, joint and allied aircrews for tomorrow’s victories with challenging and realistic scenarios.

The 64th Aggressor Squadron at Nellis is a team of Airmen whose primary mission is to fly against the combat air forces, joint and allied aircrews preparing them for tomorrow’s engagements.

The 64th AGRS Airmen, known for flying a colorful fleet of adversary-themed F-16 Fighting Falcon fighter jets, are a staple at Nellis due to their role in our mission and Red Flag exercises.

“Our Aggressors are highly trained and knowledgeable Airmen who fly as adversaries in realistic war-time scenarios against our own pilots to familiarize them before taking part in actual combat,” said Maj. Branden Felker, 64th AGRS chief of academics. “In order for them to have gotten where they are now, they were required to go through a certification process.”

The certification process is a rigorous training mechanism used by the 64th AGRS to ensure their Aggressor Airmen are prepared to accurately train, teach, and replicate challenging and realistic threats.

The goal of the certification program is to incite the pilots into a mindset shift, said Felker.

“We have to have our pilots start flying their jets as if they’re adversaries,” said Felker. “It’s a challenging task to take everything you know about flying and flip it to essentially become the adversary you’re used to fighting against.”

During their certification period, Airmen are expected to pass multiple exercises testing their certainty, understanding and determination.

Extensive studying is a main requirement for certification. New Aggressors are obligated to have a comprehensive understanding of the U.S. Air Force’s adversaries and their tactics with an even deeper knowledge of a designated subject matter. 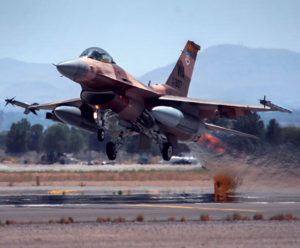 An F-16 Fighting Falcon, assigned to the 64th Aggressor Squadron, takes off during the first day of Red Flag 16-3 at Nellis Air Force Base, Nev., July 11, 2016. The 64th AGRS plays a critical role as the opposing force during Red Flag by providing combat air forces from around the world with challenges to prepare for future conflicts of war.

Felker, who is a subject matter expert in adversary tactics, said the 64th AGRS sometimes have Airmen who are so dedicated to the certification that they study in the vault for 12 hours per day.

Some Airmen get overwhelmed by the process and can become extremely stressed out; however, they’re able to overcome this through good leadership which instills confidence and creates resiliency, allowing them to develop healthy coping mechanisms and avoid negative side effects.

“When we notice a new Airman is struggling, we mentor them,” said Felker. “We understand how intense it is and we work with them to help build the confidence they need to either complete a practice exercise or stand up in front of a crowd of people and debrief after a mission.”

Once the Airmen are finally certified to be Aggressors, they’re eligible to participate in exercises as wingmen and further their Aggressor knowledge and capabilities.

“Aggressor Airmen still go through training even after certification,” said Felker. “We do everything we can to have confident, well-trained Airmen on our side so that we can drive the forces we’re training to be even better.”