“We’re providing teachers from the Antelope Valley an opportunity to see how Armstrong connects with the work of Hubble that is 347 miles above us,” stated Buckner.

During the workshop, educators learned how Hubble has allowed astronomers to observe the universe in stunning clarity, revealed properties of space and time, and shed light on many of the great mysteries of the universe.  SOFIA started its celestial observations in 2010 exploring the universe with its onboard infrared telescope. 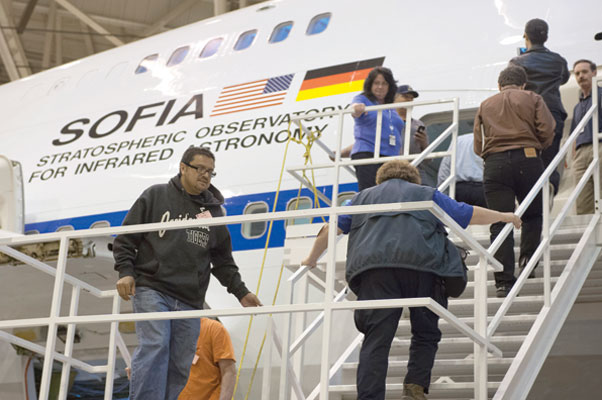 Teachers boarded the SOFIA 747 and listened to SOFIA personnel to learn about the operations for the plane and the capabilities of telescope.

“Hubble has revealed so much about the universe,” said Eddie Zavala, SOFIA program manager. “The images that you see are truly awe inspiring. What we hope to do is inspire students to pursue careers in science, technology, engineering and math.”

Becklin talked about his work on Hubble as well as SOFIA. “We get a whole different view of what is out there,” Becklin said. “SOFIA starts where Hubble stops.”

Besides learning about Hubble and SOFIA, educators participated in a hands-on activity to build a small-scale telescope then they explored the SOFIA aircraft. Teachers also visited the instrument lab to experience NASA’s unique tools. Upon departure, educators were provided hands-on, standards-aligned classroom activities designed to offer more information about our Solar System and Beyond, which they can share with their students.