All the “air show buzz” about next year’s two local air shows, coupled with my trip this week up to Sacramento’s Mather Field to help their organizers put on a first rate California Capital Air Show, got me to thinking about all the shows I have attended here in the Antelope Valley over the years.

My first recollection is as a little boy when Dad, sometime in the late 1950s, took me and the rest of our family out to the dry lake bed at Edwards to spend a day enjoying all things that fly. Those trips are what inspired me, years later, to see about the possibility of bringing back this family-friendly tradition to our home here in the AV. The results are what we now see growing again every year in our skies, entertaining new generations of aviation fans.

The subject matter for this issue’s Hangar Stories morphed back and forth with different ideas, and from out of nowhere I got this wild thought to see if I could pin down the very first military airshow in the Antelope Valley and what that show might have looked like. Digging and digging, I found a few clues that had me looking over some of my Muroc Mirage newspapers. Just when I thought I had run out of leads, there it was in bold headlines! “More Than 5000 Guests At Muroc’s Great Army Day Celebration”. The date: Friday, April 6, 1945!

Looking over a couple of issues from previous months, I found this headline: “Muroc Will Hold Its Very First Open House for Army Day Friday the 6th of April” followed by the tag line “Colorful Retreat Parade Will Climax Day As Public Visits and Tours MAAF” (Muroc Army Air Field, or Edwards as we know it today).

Realize that in April of 1945, the United States was still engaged in a World War and Muroc Army Air Field was one of the prime fields suppling bomber crews to the war effort — so it was no easy task for the military to just open up the field to civilians and keep them in line and safe without giving up military secrets at the same time! I believe there had come a time when a war-weary nation and military just wanted to have a day to celebrate and recognize all the achievements that had been under wraps for many years.

The beginning of the announcement, I would say, pretty much tells that story: “Citizens of the Antelope Valley and the Southland will see at close hand on Army Day, Friday the 6th, the mighty war machine they have built to throw against their nation’s enemies, and Muroc Army Air Field will do its share of ‘showing off’ on the big day.” Looking over the next part of that announcement makes me wish for a time machine, so I could spend a few hours enjoying the festivities! “As guests of the field, people will not only see the prized bombers and fighters of the AAF on the ground, but they will also view a giant air show employing all types of planes in simulated air combat and actual live practice bomb drops! They will eat chow in a massive field mess hall and sample the same food our soldiers enjoy stationed at the field, prepared by Army cooks. To finish off the day, the ramp will be converted to a parade ground and the guests will view a colorful retreat parade in celebration of the men and women of our military and the operations and success of all those that have worked and trained at MAAF.”

In today’s world, it would be highly unusual to see an air show’s attractions stated in this manner: “Various displays are being set up now in preparation for the event, including bombs, machine guns and ammunition from the planes, communication and chemical warfare equipment! Several training simulators will be open for inspection and interaction.” Nowadays that, I believe, would raise a few eyebrows!

The day’s events were a bit different from what we expect to see at a modern Edwards air show, but the common denominator between generations was the thrill of flying and high performance aircraft dancing in the skies, along with the excitement of getting up close and personal with aircraft that many only have seen from afar or in publications. One thing that really jumps out was the attendance, which was populated by the youth of our Antelope Valley as the local Antelope Valley Joint Union High School District, including Antelope Valley Junior College, cancelled all classes and provided transportation for all the students of the Valley! Arriving before 10 a.m. at Muroc Army Air Field, the hordes of people, parking on the dry lake bed at what is now called South Base, were greeted with B-29 Superfortresses, Skytrain transports, B-24 Liberators, Mitchells and B-17 Flying Fortresses. Plenty of fighter assets were available also, with P-38s, P-51s and even a P-47! Amazing to read in the write up that yes, even one of those Northrop P-61 Black Widow night fighters was on display! 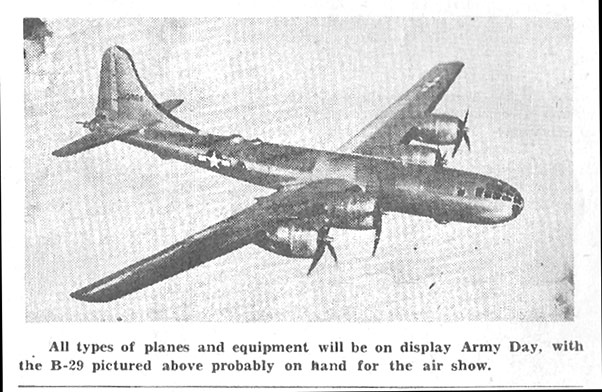 A notable thing that was pretty cool at that event was the fact that the war did not stop and training continued uninterrupted at the air field while the open house was in progress. When a returning flight of 12 B-24 Liberators from a cross country training mission arrived over the field, all air show/open house festivities came to a halt as the planes were all recovered before a very well-entertained crowd! One thing missing, that we take for granted these days, was souvenirs! It seemed that back then there was no thought that attendees would want something to remember the day, so the Post Exchange had a banner day of sales, as they were cleaned out of everything that remotely connected the guests to the air field, including shaving items and toothpaste!

To sum up the event, the last few paragraphs of the newspaper story tied it up with a pretty bow when it was said, “Other branches of the military were represented and several troops of Boy Scouts were present. Visitors ranged in age from babes in arms to octogenarians, ranchers in range clothes rubbed elbows with bankers in business suits. MAAF personnel also took to the show. The open house, the first in Muroc’s history, terminated with a parade. The Base Commander Colonel Maxwell has received several letters from heads of civic organizations commending the field on the excellence of the open house and wanted to let the public know it was the combined effort of many unseen organizers under his command that made it happen, and the thanks belongs to them.”

Well, there you have it — the very first air show/open house at the location we now call Edwards Air Force Base. Funny when I found out that the first ever Edwards air show was in 1945 and that the return of that air show will be in 2020, that makes this event at Edwards its 75th “anniversary.” That would be a great hook, in addition to its return after an absence of 10 years! Sure would be fun to have a nostalgic look back at MAAF in 1945 during the 2020 Edwards air show, and you know I would be all in to help make that a reality — but dang — where can I come up with 12 B-24 Liberators to surprise the crowd during the afternoon? Really, it’s nice to see the return of the Edwards air show next fall, if only for the nostalgia of walking a flight line that Mom and Dad, a brother, and two sisters enjoyed back in the 1950s. I can bet I was one of those “babes in arms” at the end of a very long day!